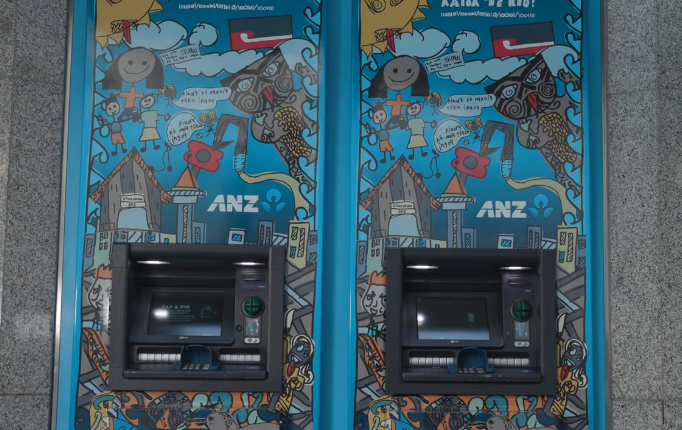 All of ANZ’s 650 ATMs throughout New Zealand now give users the choice of using Te Reo, coinciding with the start of Māori Language Week.

“Te Reo Māori is fundamental to our national identity and this is a milestone in our commitment to the language. We hope this gives people another opportunity to use Te Reo in daily life,” said Antonia Watson, ANZ’s Managing Director Retail and Business Banking.

To mark the occasion, colourful artwork from the students at the bi-lingual unit of Sylvia Park School Te Puna Waiora, was unveiled at the ATM at ANZ’s 205 Queen St branch in Auckland.

The students were asked to create designs in the theme of ‘Why Te Reo is important to them’. Each individual design was then compiled and now features on four ATMs in Auckland and Wellington.

One of the young artists was Paul Morunga Edwards, who designed the huia bird and waves on the ATM.

“First we got into groups to think of ideas about why Te Reo is important. I think it’s because it’s part of our country. It’s also special to learn so I can spread it with everyone else. It’s not scary, that’s why I think everyone should give it a try,” Paul said.

ANZ has five staff affinity groups, including a Māori and Pacific group, who played an important role in the translation and delivery of this project.

As well as English and Te Reo Māori, ATMs are available in Simplified Chinese, Korean, and Japanese.