The importance of diversity, inclusion & respect at work 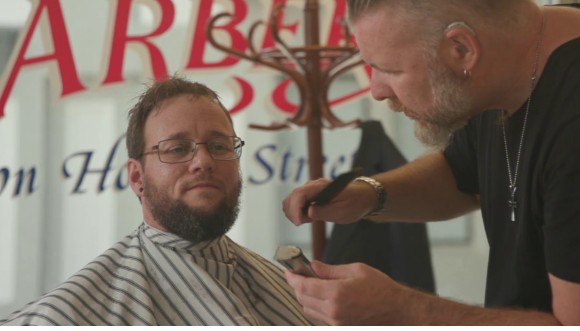 For most of us a change in corporate wardrobe policy might simply mean we take a more considered approach next time we shop. But for one ANZ employee it inspired a radical life-changing decision.

Alex Whisman remembers panicking when he received an email saying women had to wear a blouse, slacks, dress or skirt. His increased anxiety led to self-examination and a profound realisation.  Download video here:

“I had this panic moment because I didn’t want to choose a female uniform, because that’s not who I was. I was not female,” Whisman says.

Unlike many trans-people who grow up knowing they’re transgender, Whisman was 34 when he realised he identified as male.

“Looking one way and feeling another, especially when you’re acutely aware of it, it’s very difficult,” he says.

The wardrobe edict came in 2004. Despite his apprehensions, Whisman called a meeting with ANZ's head of human resources and embarked on his transition from female to male with full support from his workplace.

His transition involved legally changing his name, gender and 'coming out' to over a hundred people in a day.

“At the time I didn’t know what support I’d get from the bank," Whisman says. "Was I going to lose my job?”

Despite the high personal stakes, he proceeded anyway and it paid off. Today, many people Whisman works with may not even realise he was born female.

“Some people are really uncomfortable with their past," he says. "They’ve moved on because they had a difficult past. For me - my past is who I am.”

Thirteen years have passed since his decision to transition and Whisman is still at ANZ. He is proud of the support for diversity.

From February 2 to 18 New Zealand’s LGBTQI+ communities will come together to celebrate culture, sexuality and gender identity at Auckland Pride. The theme for 2018 is 'Rainbow Warriors: Pride and Peace'.

ANZ has been a long supporter of Auckland Pride and the LGBTQI+ community. We believe in diversity, inclusion and respect for our staff, customers and broader community.

Getting things right includes the bank’s latest wardrobe policy, introduced late 2016, which allows staff members to dress for the gender they identify with – a move Whisman warmly welcomes.

“Allowing people to wear clothes that align with their gender identity will hopefully reduce some of the anxiety gender-diverse people may face daily in areas of their life," he says.

“We spend a lot of time at work and it is good to be able to bring our whole selves to work and not have to hide it."

“I know I can be open about my transition to my colleagues, managers and leaders because of the support I get from them.”

Such inclusive policies are good for shareholders too. A growing body of research demonstrates superior performance for organisations with greater diversity, for example a new report from McKinsey & Co Delivering Through Diversity.

Despite being a deeply private person and reluctant spokesperson, Whisman wants to share his story for other people struggling with their identity.

In New Zealand, the Youth ‘12 study of transgender school students found one in five had attempted suicide in the previous year.

“I see a lot of questions from young people who are looking at transitioning, people that are coming to grips with their own gender," Whisman says.

"They want to know ‘What are the options for me?  Where can I work? Where are some trans-friendly places to work?’"

"I want them to know there are places you can work, like ANZ, that support their transgender staff.”