The COVID-19 pandemic has wreaked an enormous human, economic and social toll globally. Everyone has been affected – and no story is the same.

There have been notably diverse outcomes amongst different groups of people – by region, by industry, by age group, by ethnicity and by gender.

Both men and women have faced enormous difficulties through the pandemic, but on average the impacts have been different.

Globally, men have experienced higher rates of hospitalisation, health complications and loss of life from the virus itself.

Meanwhile, women have been more likely to lose their jobs and are bearing more of the burden of unpaid work, especially in countries where children cannot attend school. This is affecting incomes and employment prospects.

There have also been increases in the incidence of domestic violence against women during lockdowns in a number of countries.

It is possible that these impacts experienced by women could exacerbate existing inequalities.

"It is possible that these impacts [of COVID-19] experienced by women could exacerbate existing inequalities."

In New Zealand, the health impacts of the virus have been minimal and relatively even by gender, reflecting how fortunate we have been to escape the sheer loss of life experienced in other countries.

Economic impacts have been much less severe than elsewhere, too.

But we have not been immune, with some firms facing challenging times and job losses evident. Losing one’s job can be immensely challenging – personally and financially. And so far, impacts on employment and incomes have been most stark amongst women.

Relative to March 2020, employment has increased in aggregate for men (+1,000), but has fallen for women, with 10,000 fewer women in employment. And it’s not just the loss of a few hours here or there. Job losses have been seen amongst those who have been working both full time and part time.

There doesn’t appear to be a significant number of women leaving the workforce of their own volition, either. In fact, more women are now reporting that they are willing, ready and able to work.

Fortunately, New Zealand has not experienced the prolonged lockdowns overseas that have forced women to leave the workforce in large numbers to take on greater carer responsibility.

Unemployment has increased for both men and women, with more people ready, willing and able to work but not employed.

Taking into account those additional people who are employed and would like to work more hours but can’t, the underutilisation rate is sitting at 14.3% for women and 9.7% for men. 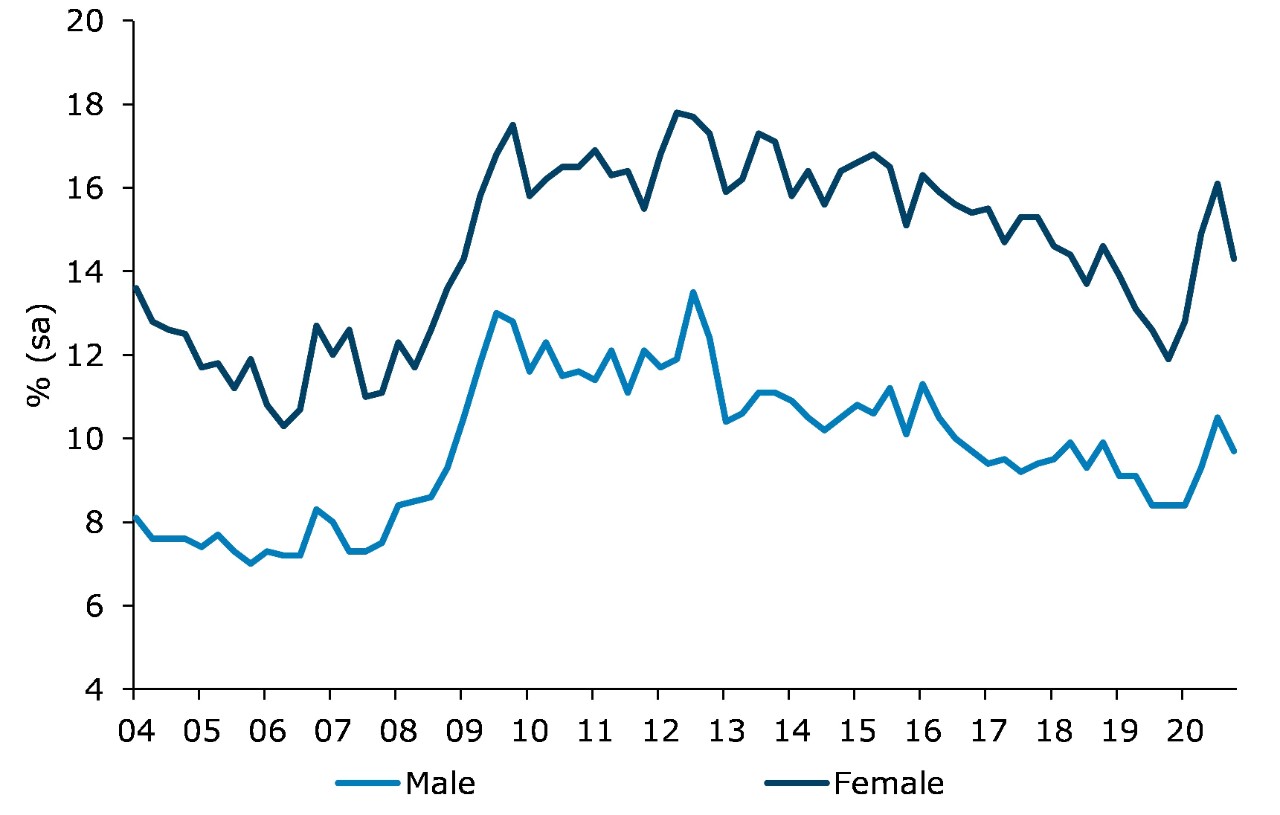 The uneven impact on female employment partly reflects the disparate industry impacts of the downturn.

The housing market, agriculture and related industries are generally doing well, but services and industries exposed to international tourism and education are finding conditions very challenging.

Job losses have been most notable in retail, accommodation and services industries – industries that, generally speaking, employ more women.

Before COVID hit, 56% of retail, accommodation and food services jobs and 83% of healthcare and social assistance jobs were held by women.

Added to that, in a number of other industries – manufacturing, transport and logistics, arts and recreation services, and professional and other services – job losses have been felt disproportionately by women.

It’s possible that this reflects the nature of the jobs held by women in these industries, but it’s hard to say how much that might matter.

Figure 2. Employment changes in selected industries since March by sex 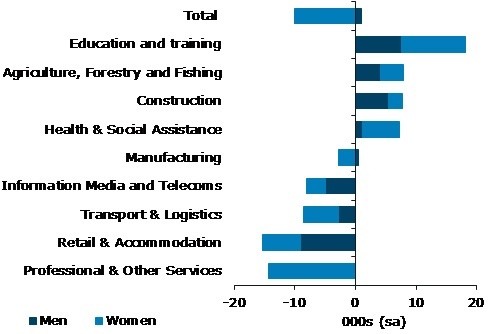 In aggregate, incomes have been cushioned by the wage subsidy and other supports, so the blow has been nowhere near as bad as it could have been.

But some people are nonetheless much worse off than they were before, and the impact appears to be skewed towards those with lower-paid jobs.

Women tend to work in lower-paid jobs than men in general, with average hourly earnings about 10% lower (not adjusting for job type and the like).

That means that the income effects of this crisis will have been experienced more by women too.

Although female employment has fallen overall, opportunities have presented themselves as well. Some women have shifted from paid employment to self‑employment.

But for women who are unemployed, it is possible that the return to work will be slower than for men, reflecting continued industry divergences and the fact that government spending on the likes of infrastructure may not create the sorts of jobs that women are looking for.

The recent community outbreak of COVID-19 reminds us that the stakes are enormous.

We all must play our part to keep the virus out until the population can be vaccinated in order to protect lives and livelihoods.

Prolonged or oscillating lockdowns would be immensely challenging, worsening the impacts on firm incomes and job losses that have already been seen.

It is also worth remembering that the pandemic affects us all differently. Different groups are more vulnerable to economic and health impacts.

We all have a role to play to protect each other.