ANZ New Zealand General Counsel and Company Secretary David Bricklebank heads up a large team at the bank - but he knows the importance of downtime, as well.

He spoke with Juno Legal about his former roles, what he learned from them, and how he finds balance with his family to avoid taking things to heart and do the best job possible.

What does your day job involve as General Counsel and Company Secretary at ANZ Bank?

Well, it's relatively frenetic. I get up early to run the kids around, and because I am addicted to my phone, I check it first thing to get up and running straight away.

All sorts of interesting and thorny issues end up with me, and the great legal team we have at ANZ NZ. Being available to address these issues is central to being General Counsel at a complicated organisation.

Part of the job is being “at the top of the cliff” – which means looking ahead, and helping ANZ prepare for ongoing and substantial regulatory reform – while also being at the bottom, to solve issues when things go wrong.

The amount of regulation financial services organisations have to work with is increasing substantially. In that context, the role of the in-house financial services lawyer becomes even more important, in terms of interpreting and understanding the laws and regulations which will govern the business we work for, and enabling that business to continue to grow. 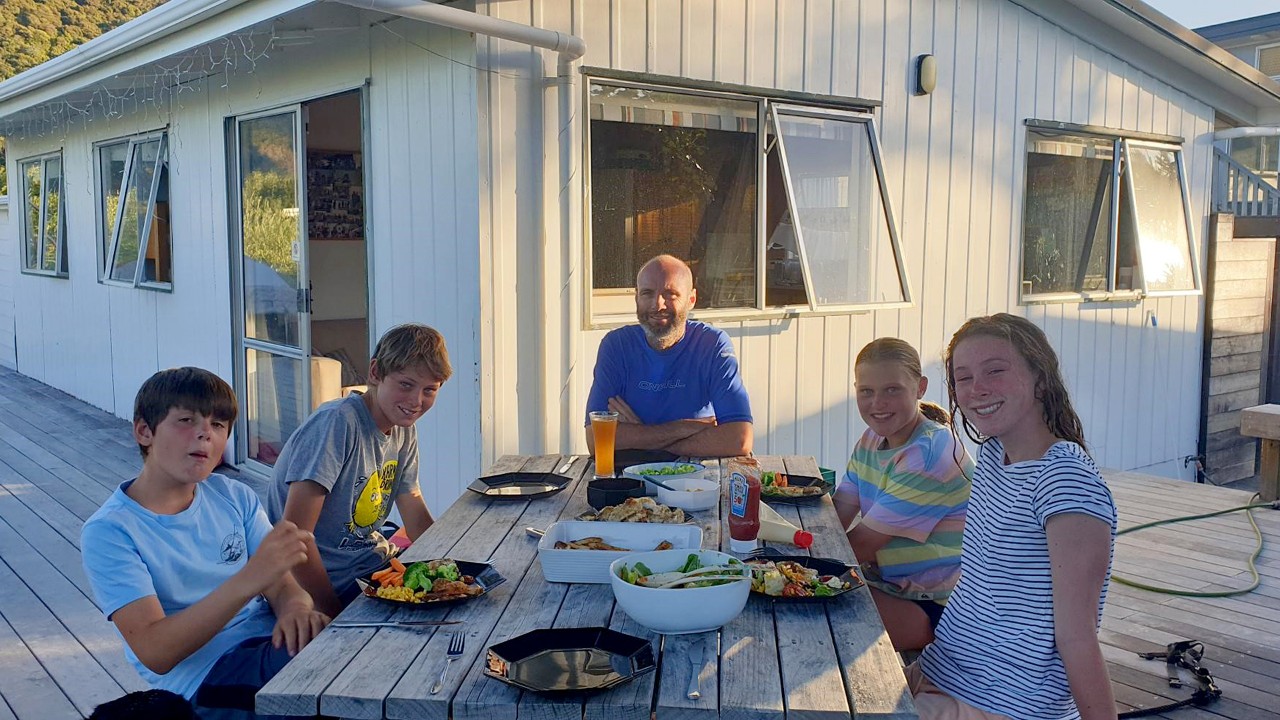 David at his property in Taupō Bay, Northland.

What did your early career business roles teach you?

I studied Law and Finance at Otago University, but I’ve never worked in private practice. The day after completing Profs, I left for London. I worked in financial services businesses for a couple of years, including on the trading floor at Salomon Brothers, at Lehman and ABN Amro in finance and compliance roles.

I then took a legal role at Henderson Global Investors, working on their global retail fund offering, before moving into a property role with them, which involved structuring unit trusts and their investments.

There was a legal aspect to that role, but there was also the business development side. It helped me understand risk appetite, from a business perspective, and from a legal perspective, I learnt a lot about what matters most to a business.

You can tie yourself in knots if you’re not focused on the right things. I think it made me better at performing in-house roles.

"You can tie yourself in knots if you’re not focused on the right things."

What are the challenges you and your team are facing that keep you awake at night?

I sleep pretty well, but the tsunami of regulation coming through is a challenge. Especially where that regulation puts pressure on the people implementing the reforms and also those that are exposed to uninsurable and indemnifiable risks. We’ve worked really hard at ANZ NZ to help both sets of people; and it matters even more given the past couple of years.

In my role, it's easy to take issues ANZ NZ faces to heart, but at the end of the day it's a job, and you've just simply got to do your best. When it’s stressful, you need to be able to step out of that, and get on with life. I've learned that throughout my five years in this role.

In the early days, I took things too much to heart, but as you grow, you get to understand what matters and you also observe and learn from people in similar roles, as well as the Board.

You realise you perform much better when you're calm, objective, and able to bring an independent mindset. How do you unwind and find that balance?

During a stressful period a couple of years back, I decided to look after myself better, eat well and do a lot of exercise.

So I run. I’ve done the Kepler Challenge twice, and a few other marathons.

We've got a place up north at Taupō Bay, which we bought when we were relatively young, and we get up there as often as we can. It’s a great place to chill out and forget about things.

We've got three kids who are 11 to 14, and our weekends, early mornings and evenings are dominated by their sporting activities – which are currently cricket and water polo.

Family takes priority over everything and it’s a message we try to get across to our team. We've had some very busy years at ANZ NZ with everything that's been going on, and we've got people that work really hard, and love the job - but we try to make sure they look after themselves as well.

How would you describe your leadership style?

I care about the people I work with, and for.  I'm very curious, so I like to get into details and get my head around the issues I’m involved in. I also like to be visible, and I like to know and understand how each member of the team is going.

We have weekly calls, which we started during Covid and have continued since, as they’ve been good when we can’t have face-to-face interaction.

If people have an issue and they come and talk to me, I believe I’m supportive and willing to listen to what's going on.

Are there any non-legal aspects of ANZ NZ you’re involved in?

There are a few. For example, I recently took up the role of Chair of the ANZ New Zealand Staff Foundation Advisory Group, which does due diligence and reviews on charities applying for funding before giving recommendations to the Trustee on which applications to approve.

The Foundation has been running since 2000, and collects donations from participating ANZ staff members via payroll giving - ANZ matches the donations at a rate of $2 for $1.

Grants are distributed to worthy charities across New Zealand during our twice-yearly funding rounds, and more than $8 million has been given out to 920 charities over the years.

It feels good to be involved with something which has such a distinctly positive outcome for so many people.

It’s a good fit for me, also, because it allows me to bring a governance eye to the process, and use those skills to benefit the community, so it’s very satisfying in that regard.

Helen Skinner has been appointed as the new Head of Responsible Investment for ANZ Investments.

The Chief Financial Officer of ANZ Bank New Zealand (ANZ NZ), Stewart Taylor, is leaving the company. Mr Taylor is to be the Chief Financial Officer of New Zealand insurance company Partners Life. ANZ NZ Chief Executive Antonia Watson said today that Mr Taylor had played a significant role in helping grow the bank in recent years, and would be missed. “Stewart loves a challenge and this change will enable him to use his great leadership and organisational skills even more,” Ms Watson said.