Geoff Popham’s first memory of art goes all the way back to kohanga reo – now he’s bringing his modern vision of Matariki to ATM screens around Aotearoa.

The 38-year-old Māori artist and designer, who identifies with Ngāpuhi, Ngāti Hine and Ngāti Ranginui, grew up in the small community of Awarua, south of Kaikohe, in the far north, “close to our marae, and close to the culture”.

As a child, he spent a lot of time at Ururangi Marae in Awarua, Wairoa Marae in Bethlehem, and Tau Henare Marae in Pipiwai - all of which instilled in him a sense of artistic appreciation.

“I would look up at the tukutuku panels, and think, yeah, I’d like to be the one who makes that,” Geoff says.

His late uncle, Wallace Wihongi, was among his most prominent supporters as he honed his art skills – the well-known rangatira [leader] was a lecturer in Te Ao Māori and tikanga at Auckland University’s Te Tai Tokerau campus in Whangarei for more than a decade.

“He encouraged me to always try my hardest, and to do my best with the talents I had, and pushed me into the creative world,” Geoff says.

He also pays tribute to his parents, and many uncles and aunties – his mother being the youngest of 19 - for making him who he is, and encouraging him to give art his best efforts.

Geoff’s understanding of art began with traditional Māori designs, and as he grew older, he gained an understanding and appreciation for modern art, eventually gravitating towards graphic design in high school.

“After being exposed to the broader art of the world, and different styles and genres, it really excited me to create a fusion of traditional Māori art and modern design,” he says.

"There’s a balance of trying to create something new - but also staying true to traditional forms of Toi Māori - it’s an exciting challenge - to push the lines of traditional art forwards using modern styles and mediums."

During his career, Geoff has worked with numerous companies and organisations to create digital branding and designs, as well as working on whakairo [wood carving], pounamu [greenstone], paintings, illustrations and other artforms – many of which have been exhibited.

“I think New Zealand has one of the most amazing art scenes in the world,” Geoff says.

“The amount of amazing talent we have, and our history of art - both Pākehā and Māori - is hugely influential on the culture.

“I think it’s awesome that ANZ, and other big companies are embracing Māori culture - it’s indicative of a culture shift that’s happening, a revitalisation of Māori culture here, and it’s becoming more common to see Māori art and design.

“Those big companies play a big part in that revitalisation, because they have a lot of people viewing what they’re putting out.” 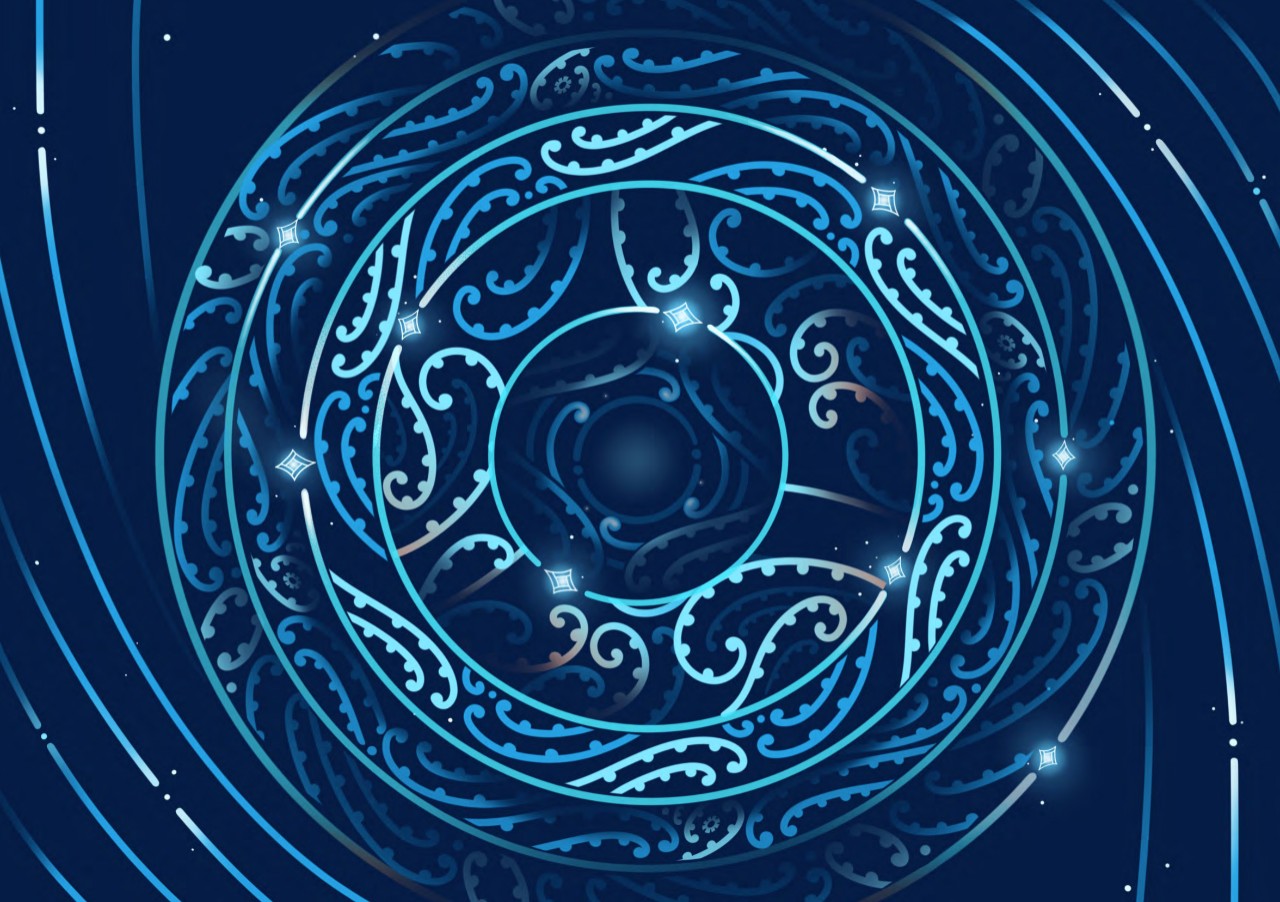 “We look to the future with hope - so Matariki is a great time to reflect and think about the past, present and future.

The nine stars of the Matariki [Pleiades] constellation feature centrally in the tohu, with their depiction inspired by whakairo harakeke [flax weaving].

Each star is located on its own star trail – inspired by long-exposure astrophotography – which symbolises our passage through life.

“The star trails depict the passage of time - and also the trail that we lead through life, and those important people that we walk along those trails with,” Geoff says.

The design is generally circular, with concentric circles inlaid with koru [fern] patterns coming together to take the shape of a kanohi [eye].

“The Matariki origin story tells us that, after being defeated in battle by his brother Tūmatauenga, Tāwhirimātea threw his eyes into the heavens in anger,” Geoff says.

Outside the star trails, the intersecting spiral [takarangi] pattern represents Papatūānuku and Ranginui [the Earth Mother and Sky Father].

“The kanohi combines with the takarangi and star trail motifs to represent the vision we must have to move in the world,” Geoff says.

“By looking back at past generations, learning from successes and failures, we can turn to the challenges the future brings with hope, determination and strength - eyes wide open to the challenges, and ready to face them.”

The koru within the design represent growth, parents, and their children.

“We also look to the future generations - the new shoots of koru needing aroha [love], guidance, protection and wisdom to allow them to grow and flourish - so they too can face the challenges of tomorrow.”

The multiple layers of koru around the centre of the design represent whakapapa [geneology] – “from the beginning creation story, to the people of today”.

Geoff says he hopes the design will draw people’s attention, and maybe inspire them to learn a little bit more about Matariki, and form their own connection with it. 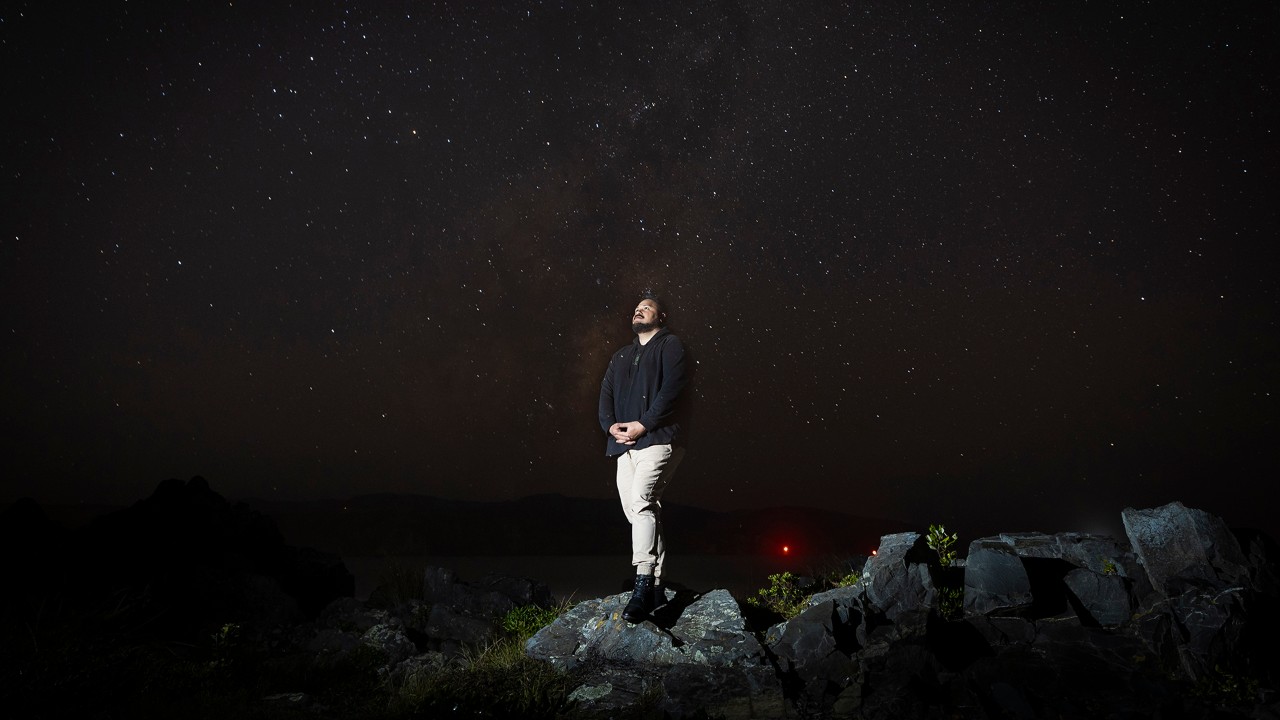 Geoff Popham gazes up at the stars on Wellington's south coast.

For Matariki this year, Geoff will be spending time with his biggest inspirations - his wife Jamie, and their two children JJ (11) and Taylor (7).

The whanau are planning on enjoying a meal of kaimoana [seafood] from Wellington’s south coast, while also using the time to learn about their whakapapa [geneology], and tell the stories of Matariki.

“Matariki as a celebration is actually something that’s quite new - when I was young growing up it wasnt a huge focus, but its awesome that it’s becoming one, with more people learning about it,” Geoff said.

"It’s really awesome that Aotearoa is embracing it because it’s something that is uniquely ‘us’ - unique Māori, but also uniquely from this part of the world – a celebration which is not imported -something that has grown here, and will continue to grow here.”

ANZ Bank has introduced six weeks of paid gender affirmation leave, and up to 12 months’ unpaid leave, to its employees in New Zealand and Australia.

We hear from four people with close connections to Waitangi about what the Treaty means to them.