Over the past 20 years, Malcolm and Caroline Rau have quietly built up Gisborne region’s largest deer herd, giving their operation another layer of resilience in a very changeable market, as well as other benefits associated with diversification.

They farm Puketia Station on Koranga Valley Road at Matawai, nestled in the misty foothills of Te Urewera, with an even split of sheep, beef and deer – a deliberate strategy aimed at providing resilience to market fluctuations.

Like many farmers, they were passed the baton by the previous generation – initially leasing Puketia from Malcolm’s parents in 1999, before buying it from them in 2006.

A year later they expanded, leasing the neighbouring 400ha Manakotahi Station to make a total of 1000ha effective.

Their work over the past two decades was recognised last year, when they were named Federated Farmers’ Wairoa-Gisborne-East Coast Farmer of the Year - and their three-year average surplus per ha of $695 certainly played a part in that.

Sheep and beef are the cornerstone of many Kiwi farms, but Malcolm says having deer in the mix has more than one advantage. 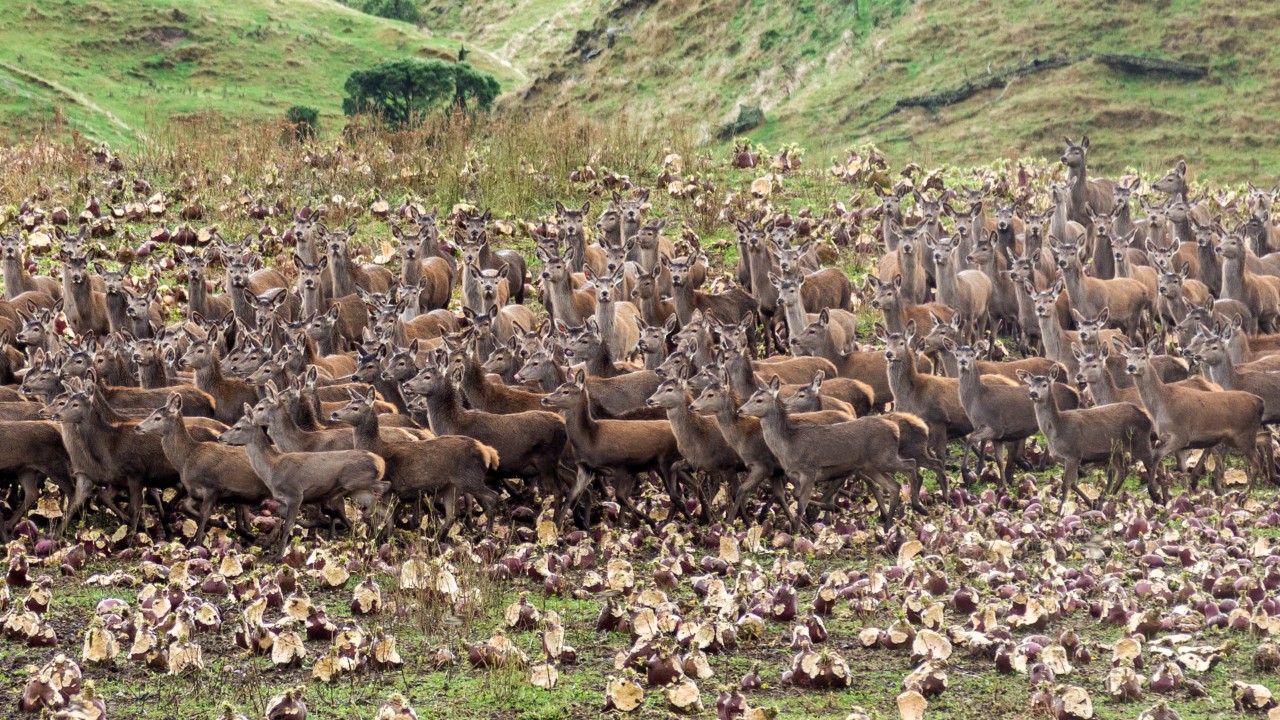 “There are definitely benefits to having that third stock species in the mix - pasture-wise and also parasite-wise - it actually benefits all the stock,” he says.

“One class or one species will consume the worms or larvae from the other one, but it won’t affect them - they’re not compatible, so they’re taking out each other’s worm burden as they go, with a little bit of stock management - you put the right class of stock, at the right time, in front of the next class of stock.

“Particular classes manage the weeds too - so we don’t really need to spray anything and there’s less chemicals around the place.”

Despite a few “stitches, broken bones and hospital visits” from ill-tempered stags in his early days, Malcolm says he loves working with deer. 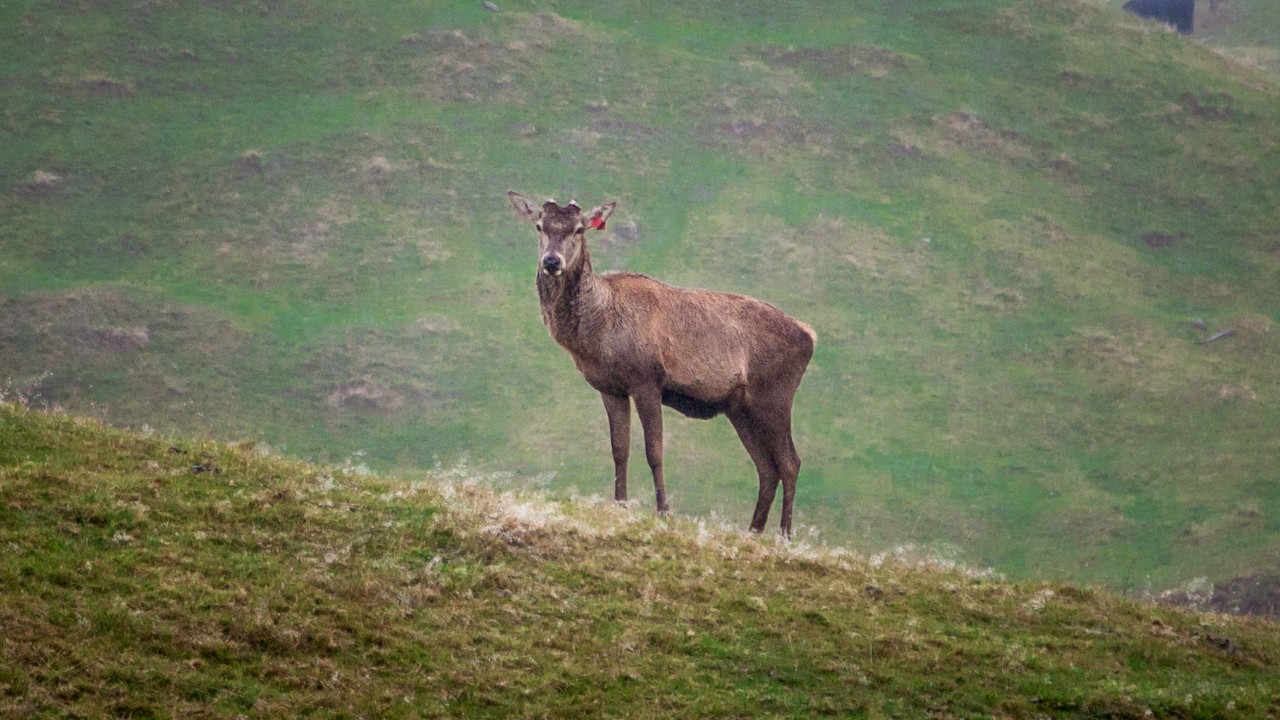 “I grew up on a deer farm and always worked on deer farms, so it was a natural fit,” he says.

“At the time, when I really started building up in deer in the early 2000s, the industry was very low, and I started out with a small herd of about 120 hinds. We have a few thousand deer now, so we’ve come a long way.

“I was lucky in that respect, that I was able to build up our herd size in the down times.”

Genetics and feed are important factors in any deer operation - but Malcolm puts another one above them all - temperament.

“A lot of the time I’m in the deer yards by myself, so if something goes wrong, there’s no one around to do anything, or anyone with the skills to help - it’s me and them, all the time - so temperament is number one - it goes ahead of production,” he says.

“You’ve got to enjoy what you do and if you’re looking over your shoulder all day, it kind of wears you out.”

The biggest challenge, day to day, is still price fluctuations.

Since the Covid-19 pandemic began, venison prices have dropped around 50%, with premium New Zealand venison less in demand from overseas restaurants, many of which cannot open. Velvet sales remain steady, adding another income stream to the operation. 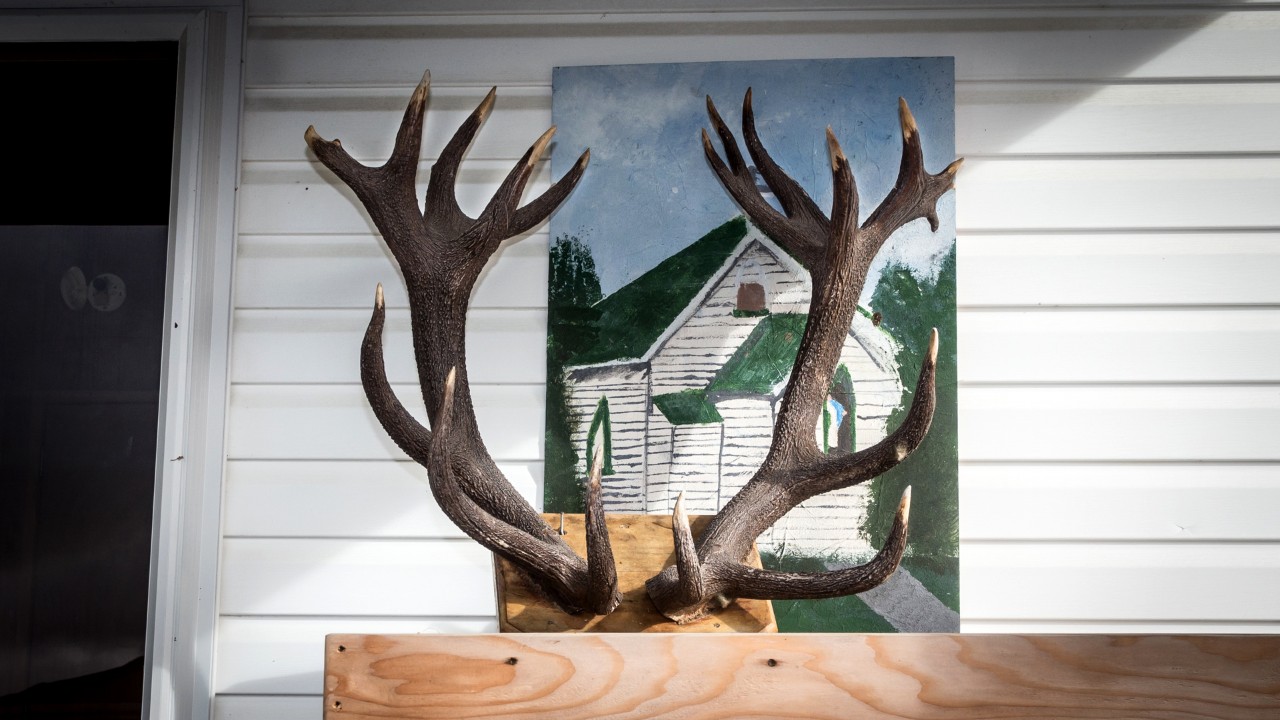 “Velvet dropped a small amount, but nothing too much - maybe 10% - which is probably similar to sheep and cattle - it normally fluctuates that much year-to-year anyway,” Malcolm says.

“We were actually budgeting on a rise in prices because of Covid-19, so we put a little bit more into it last year, because during the SARS virus, the price of velvet improved because of the belief that velvet improves your immunity - but it didn’t happen this time, for whatever reason.”

“Venison prices remain subdued for now, and while velvet has managed to largely maintain its value through the pandemic, freight issues have been challenging for both venison and velvet exporters,” she says.

“European markets remain relatively slow to recover, but should improve with lifting vaccination rates as the year progresses, which, in turn, should increase demand for venison in Europe towards the end of this year - when venison consumption tends to peak.” 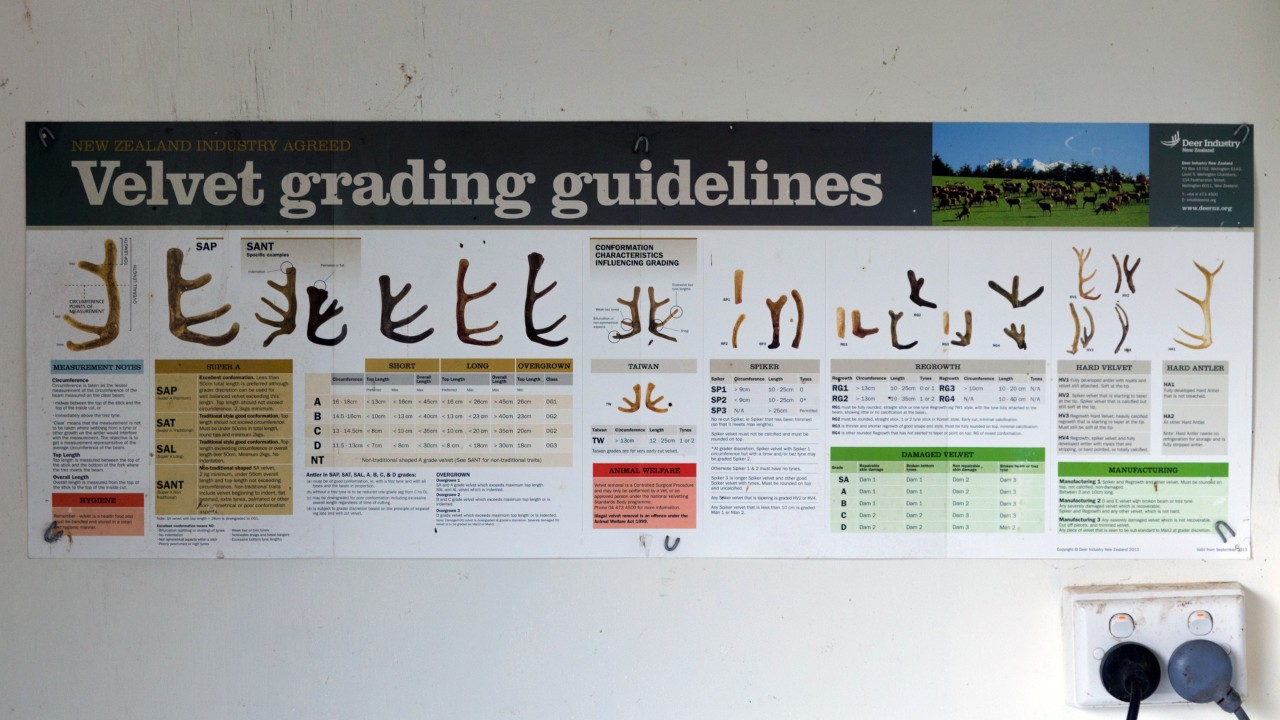 Industry bodies like DeerNZ are also continuing to focus on improving the reputation and demand for New Zealand velvet and venison globally.

Velveting is now governed by regulation, rather than simply being subject to a Code of Welfare, and a new electronic tracking system called VelTrak is being implemented. Farmers began registering for it in May, with the expectation it will be fully up and running before the next velvet harvest.

Inevitable price fluctuations give rise to a need for lending, and Malcolm says his bank has stepped up whenever needed.

“The first 18 years weren’t much fun financially, but the last five years have been a bit more enjoyable because the pressure’s not as high as it was - it’s a lot more fun now the pressure’s eased a bit,” Malcolm says.

“ANZ has been great - we’ve had to call on them, actually, just to help us out a little bit this season - and that was no problem at all.

“Our banker knows the business really well - he’s been with us 14 years - so he was part of the excitement of the ‘Farmer of the Year’ - but he’s also been there for the tougher times too.” 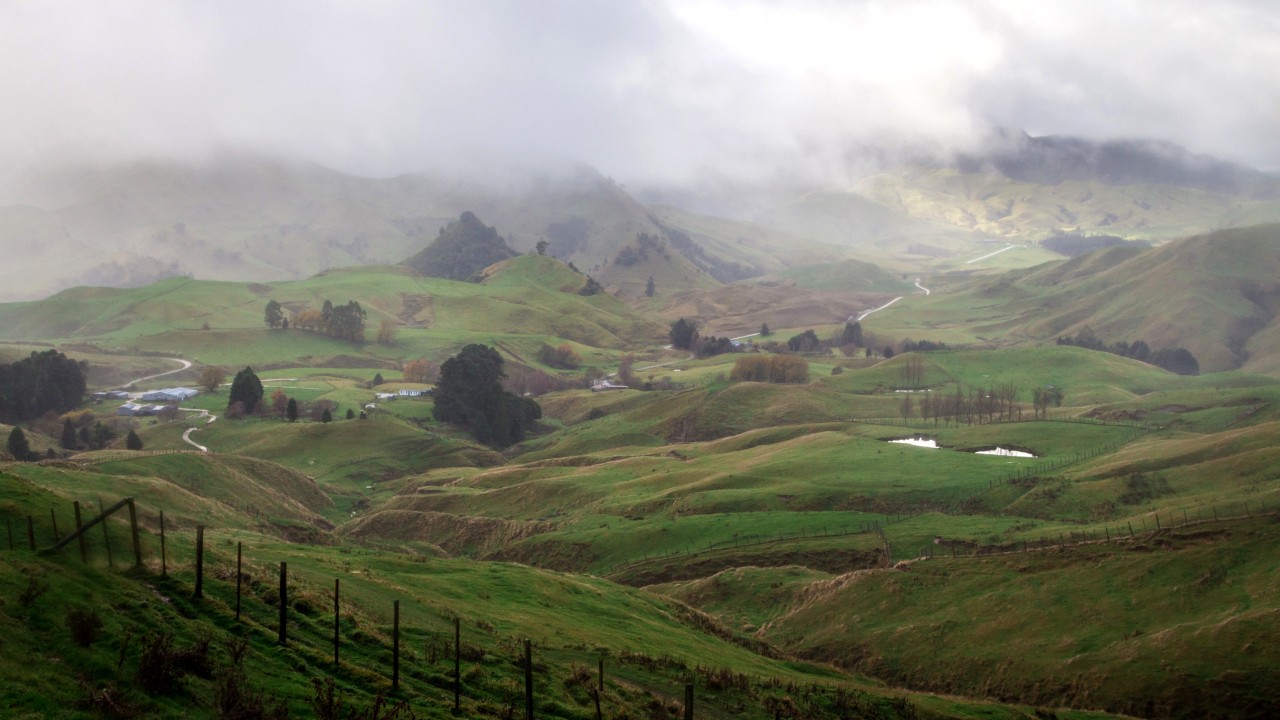 Looking forward, Malcolm says while land in Matawai doesn’t become available often, they’ll definitely look for the opportunity expand if it does.

“I think we need to grow the business to keep up,” he says. “To have a productive farm, the size increases every year - 400 ha used to be a pretty productive farm, but you need to aim a bit higher than that now.

“It’s an economy of scale and the scale keeps moving, so we’ve got to keep moving with it.”

The couple’s three kids – identical twin daughters Isobel and Fritha, and son Murdoch - will have the option of farming Puketia if they want it, but there’s no pressure.

“To be fair, it would probably be easier if no-one wanted to go farming because we’d be able to help them all the same in whatever they’re doing,” Malcolm says.

“But all of the kids know how to shear a sheep, how to velvet stags, calve cows - they can all do it.”

Fritha is a civil servant, Isobel is a Rural Vet Technician, and Murdoch is shepherding in Pahiatua. Caroline says they instilled a strong work ethic in their kids from day one.

“I see a lot of children not getting out of bed and sleeping until lunchtime, then they get up and go to bed at midnight - and I don’t believe that’s how the world is - and it never will be,” she says.

“So we were quite hard in instilling that in our kids - they’re all hard workers - so if you want to sleep, you can go to bed early - but you still get up early.”

Asked what the secret to his success was, Malcolm says it all comes down to persistence. 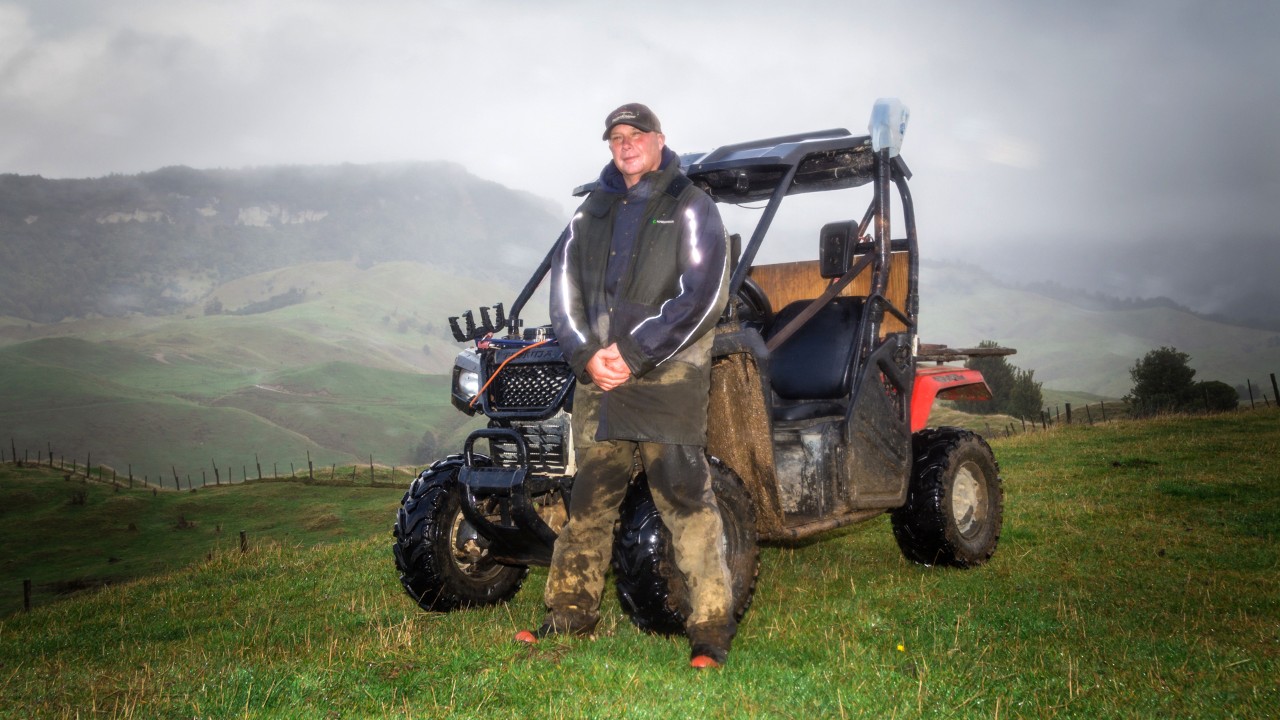 “Being a good farmer is all about experience. It’s not something you can know when you start; it’s something you’ll gain through your career,” he says.

“Just work at it - if nothing happens for a long time, just keep at it.

“We felt like we were treading water for years and years, and it’s just starting to work out now.”

Jake Jarman, an ANZ Relationship Manager, has won the top spot in the DMG Young Farmer of the Year competition.

With wool prices at rock bottom, the only way is up

Despite rock bottom prices, ANZ Agricultural Economist Susan Kilsby explains why she believes wool is here to stay, why it plays a vital role in a diversified and sustainable farming sector, and why there are many reasons to be optimistic.

How economies perform in 2021 is highly dependent on the course the pandemic takes, how quickly vaccines can be rolled out, and how well they work.