It’s been an eventful 12 months for Ben Murphy.

In April 2019, he launched his first line of honey – Tambo Valley Honey – during one of the worst droughts Victoria has seen.

A few months later, his farm was hit by the devastating bushfires that tore through East Gippsland in late December. And now, like many business owners, he’s trying to figure out how to keep the lights on during the COVID-19 pandemic.

Speaking from Bruthen, a small community of around 1,000 people in the foothills of Mount Hotham, Ben shares what life as a new business owner has been like over the last 12 months.

How long have you been running Tambo Valley Honey, and what made you want to take the leap into running your own business?

My wife and I have been running Tambo Valley Honey for two years in June. We’ve got a couple of employees, and we manage about 1200 hives. We operate out of Bruthen, but we take the bees all over the state – sometimes interstate too.

I’ve always wanted to run my own business. I’m a butcher by trade; I was doing that for seven or eight years and wanted to buy the butcher shop, but the timing wasn’t right. A mate of mine was working for a beekeeping business, but was moving overseas so they needed a worker. I just said ‘You know what? I’ve never been stung by a bee, I’m going to give it a go!’. I went in there and fell in love with the lifestyle. Five years later, my wife and I own it.

Ian – he’s the guy I bought the business off – has been a great mentor to me over the years. Beekeeping has been in his family for generations, so the wealth of knowledge he has is incredible. He could have just sold me the business and walked away, but he’s always made himself available to give me a hand and get me up to speed with things if I need it.

What is it about beekeeping that was so appealing to you?

Haha! The lifestyle of a beekeeper completely contradicts the lifestyle of a butcher! At the butcher shop, you’re in this small space, with one window and four other butchers working with you. But with beekeeping, it’s just you and a few other people, out in nature. Often you’re working in the bush in different parts of Victoria. It’s a really nice way to spend the day.

What’s life in Bruthen been like since the fires?

Everyone in the community has been affected, whether that was physically losing their homes, or their jobs, or simply being mentally drained by what happened. You might not have lost any property or anything, but you know people who have, and that takes a toll.

A few months ago, it felt like things were starting to get back on track. The Empty Esky campaign was really good at bringing people back to the area, and was just starting to bring in more tourism. But now with COVID-19, that’s scared everyone away again.

People here are really getting behind their local businesses though. Instead of shopping in town or going down to Lakes Entrance to pick up takeaway, most people are staying in Bruthen and supporting the businesses that are really struggling. Everyone knows everyone here; it’s a really tightknit community.

What effect has COVID-19 had on your business?

We’ve been pretty lucky, in that COVID-19 hasn’t had much impact on the way we do business. We were almost at the point of getting our stock into cafes, but things have slowed down there, due to café closures and restrictions. In a way, it’s forced our hand a little to get an online store setup. We’ve started building a new packing shed, and my wife and my mum will be running that. We’ll start doing more online orders, and look to push into more stockists as well.

But as far as the bees are concerned, if the sun’s shining, we’re out working and getting them ready for winter and hibernation. And if it’s a day like today – it’s pouring down now – we’re doing maintenance work, or painting, or extracting honey.

Visit and follow Tambo Valley Honey on Facebook to find out more about the delicious product and support this local business. 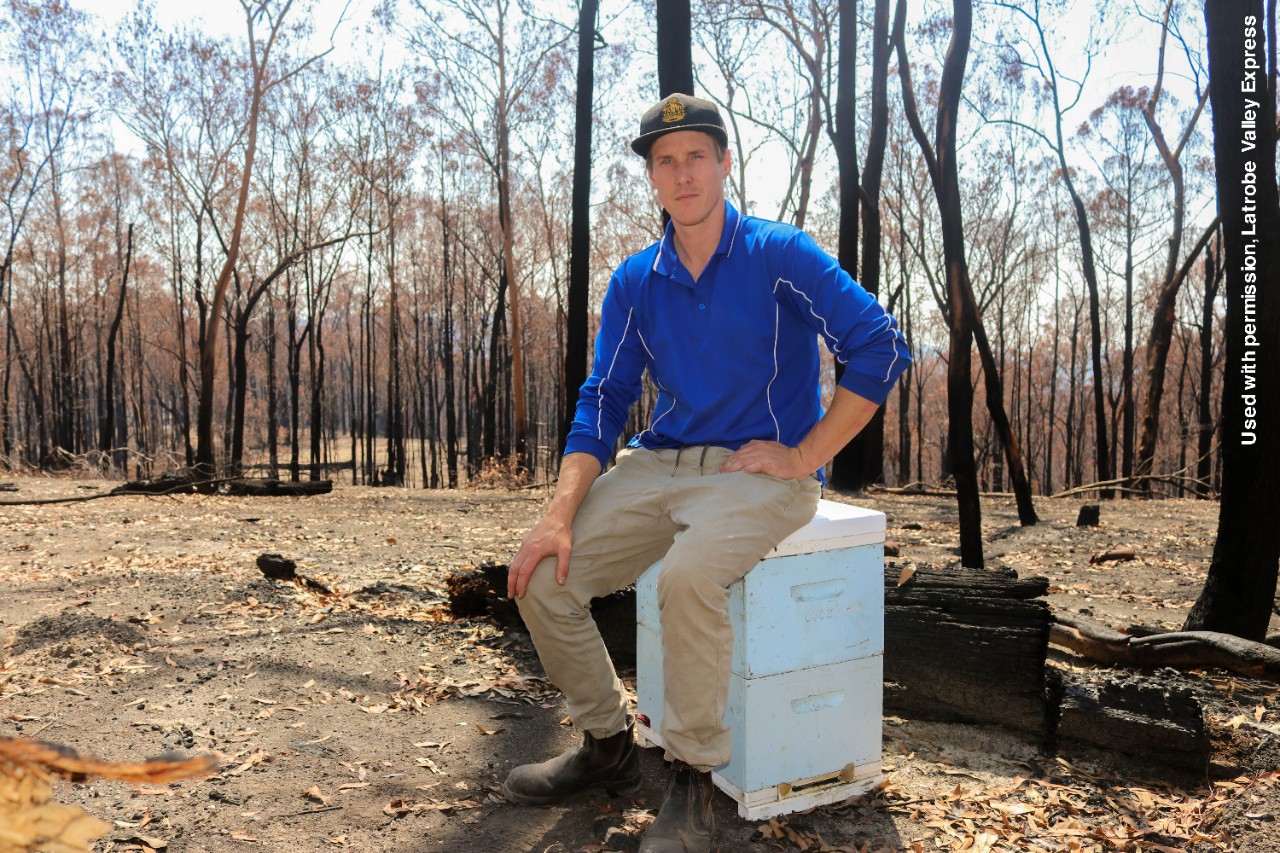 What has the drought, and then the bushfires, taught you about running a business?

The drought made us approach the way we do things a little bit differently. The majority of my bee sites are here in East Gippsland, so we’d chase certain rainfall patterns, to find areas of good growth and pollen and nectar for the bees.

You’re always keeping an eye on rainfall patterns around the state. If one area is constantly getting rain, we say to ourselves ‘Right we’ve got to head over there to check out the trees and see what’s going on’, rather than staying at home and hoping that something will happen. You have to get on the front foot and really make things happen.

As for the fire, that’s been the biggest one for me. The drought looked like it was starting to come to an end, there was a patch of bush that was flowering and everything was starting to work together.

And then three weeks later the fire ripped through. That was hard. Lives were lost.

We had 450 of our hives in the fire impact area, and the roads were closed due to the amount of trees across the road. There was a two-week period of not knowing what had happened to our bees. We lost 220 hives – each hive holds up to 50,000 bees – but the bush that’s burnt is the biggest loss we’re going to face. The fires have been devastating to our industry.

But on the whole, we consider ourselves pretty lucky. Yeah, we lost some stuff, but we’re alive and well.

What support did you get from the East Gippsland community after the fires?

Directly after the fires, we shifted some of our hives to South Gippsland. You would have thought you were in a different country; it was so green and lush! The support we had from strangers down there was amazing – people offering us land to put the bees on; it was overwhelming, and a really beautiful sense of community.

We also did a collaboration with three other local businesses that were affected – not by the fire directly, but by the lack of tourism – putting together a box of local produce that contained milk, eggs, bread and obviously our honey. That’s been really good in a mental health sense; four different people, from four different walks of life, that we’ve been able to bounce ideas off and just ring up for a chat and take your mind off things. We wouldn’t have met them if it wasn’t for the fire.

There was a guy I’d been mates with for years. We’d never been super close, but he was fantastic to me during the fires. He could sense that something wasn’t quite right, and he was always there for me.

People like that – people who see the good in people – are so important, especially in times like this.

I never directly reached out to anyone for support. There are people out there who are far worse off than we are; I knew that we could get through this by ourselves. I got a call from ANZ about taking part in one of their markets in Melbourne. We had no idea it even existed, but they knew that we’d been impacted and that this would be a benefit to us. We hadn’t done many markets, but our bank manager in Bairnsdale really pushed us to get involved, and I’m glad we did.

It’s opened up more avenues for us – we’ve got our first stockist in Melbourne and we’ve really widened our customer base.

If you could give three pearls of wisdom to anyone thinking of setting up their own business, what would they be?

1. Surround yourself with good people. That’s definitely number one! And find yourself a mentor. I wouldn’t have been able to get through this period without Ian.

2. Don’t be scared of change or taking risks.

3.Back your own judgment.

Where can people get their hands on some Tambo Valley Honey?

We’re working on an online store and we’ve got a stockist in Melbourne now, but in the meantime, just drop us a message through our socials and we’ll post some out.

And have you been stung by a bee yet?

(More laughter) I’ve been stung a lot! It’s part and parcel of the job. You get used to it though.

Emily Kratzmann is a Melbourne-based writer with a passion for storytelling, cooking and aimless strolls with her dog.

What do you do when your biggest customers suddenly disappear – and your business model with them?