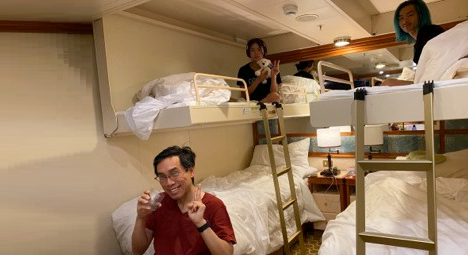 Jeff and his two teenage children, living out their 14 day quarantine in a cabin on the Diamond Princess.

Jeffrey Soh and his family were enjoying their cruise on the Diamond Princess when COVID-19 struck the vessel. They were quarantined on board in Japan’s Yokohama on 4 February for two weeks.

This was an experience that will certainly make for great conversation at dinner parties. Something that happens to you only once (or probably never) in a lifetime.

For the last five years, we’ve cruised every 12 – 18 months so we like to think we’re veterans in that sense. Last year, my wife, Aun Na and I came across a last minute deal for a destination on our list of ‘to-cruise places’. We knew this would be the perfect holiday for us and two of our three kids, Xander (19) and Kaitlyn (16).

I had had a big year at work and Kaitlyn was turning 16 – a milestone birthday. We wanted to both recharge and celebrate.

We chose the Diamond Princess for a cruise through north Asia. The ship was sailing back to Yokohama in Japan on its final leg. We were thoroughly enjoying the last couple of days.

It was then we heard the captain’s announcement over the loud speaker: a former passenger who had recently disembarked in Hong Kong had tested positive for COVID-19.

It felt so far removed from where we were at that place and time; no-one was taking it too seriously.

It wasn’t until everyone on the ship was required to return to - and asked not to leave - their cabins we realised just how serious the situation was.

We were informed the mandate from the Japan Ministry of Health was for us to be quarantined on the ship for 14 days.

As a family we’re used to being in each other’s space but this meant the four of us were stuck in a windowless cabin with no balcony for the entire quarantine period of 14 days.  Although it felt uncomfortable at the beginning … we adjusted.

Each of us somehow managed to find our own space in this tiny little cabin. The kids, being teenagers, are used to staying in their own rooms and doing their own thing but being confined to the cabin meant they couldn’t avoid us.

Surprisingly, they found ways! If they needed space they would just put their headphones on, go to their own corners and block us out. 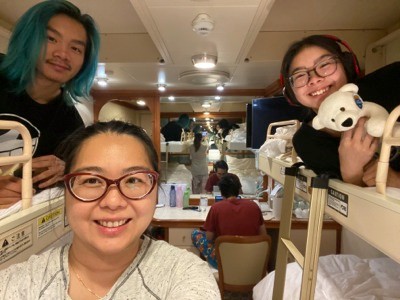 Jeff's wife, Aun Na with their kids Xander (left) and Kaitlyn (right) and Jeff hard at work in the background.

Empowering the team at work

I work in projects with three teams – one in Melbourne, one in Sydney and one in Bangalore. So it wasn’t too hard to work remotely while on the ship.  As Bangalore is four hours behind us, I’m used to being available to help with anything, even if it may be after 6pm Melbourne time.

Sometimes I was unavailable to assist due to the stability of the internet connection on the ship but this turned out to be a positive – the squad (team) was empowered to run and manage initiatives which may not have been available to them otherwise. They are very capable but this provided them with an opportunity to step out of their everyday responsibilities and reach their full potential. 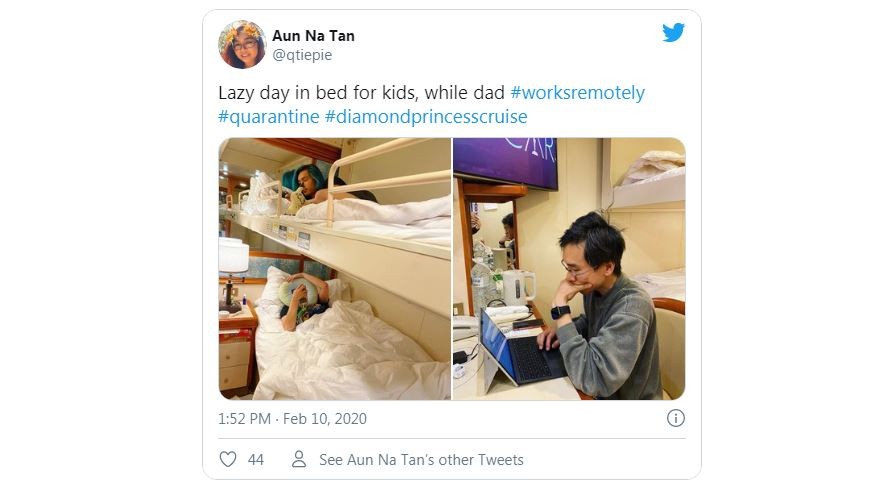 Aun Na tweets from the cabin, keeping the outside world up-to-date with life on the Diamond Princess

As we were in one of the internal cabins, we were allowed to go out onto the public balcony to get some fresh air more frequently than the passengers with a room balcony. But as we approached the end of our quarantine period all we wanted to do was get home.

We were fearful of having to start the 14-day quarantine clock again – something that would happen if any one of us tested positive. So we didn’t leave the room at all for the last few days…. We were very well fed and had everything we needed. The family out on the balcony for their allocated hour of fresh air. View of the balcony where passengers could get their daily exercise.

By this time, the Australian Government were offering chartered flights to deliver the on-board Australians back home to continue quarantine in Darwin. We decided to take the opportunity rather than go it alone.

It was the night before we were due to fly out; we were putting our bags outside of the cabin when we received the phone call. The person on the other end informed my wife that my daughter Kaitlyn had tested positive for COVID-19.

Kaitlyn was asymptomatic so physically she felt fine. Emotionally however, it was upsetting for her to hear the news she was a carrier of the virus.

Two options were laid out for us: Kaitlyn could remain in a Japan hospital (as she is a minor, one parent could stay with her) while the others take the chartered flight back home to Australia; or we could stick together as a family.

It was a very easy decision for me - we stayed together, carrying out the rest of our extended quarantine period in a rural Japanese hospital and then fortuitously at a hotel in Tokyo Bay (this in itself, posed its own unique challenges). The Soh family finally step foot off the Diamond Princess.

This experience has certainly taught me many vital lessons about life….

1)      You cannot control your circumstances but you can control how you react to them.  If you let your circumstances affect you in a negative way emotionally this can in turn affect your physical wellbeing. You need to make the best of the situation you find yourself in.

2)      Always try to keep a level head because things don’t always go as expected. We had to learn how to be agile in our decision making - the pace of change was so rapid that anything we planned got thrown out.  We had to be calm, get advice from others, take our time to think things through and then make a decision.

3)      And last but not least – don’t be afraid to question what’s being asked of you. We were asked to be separated from Kaitlyn many times throughout the whole process but we kept insisting we remain together as a family. Go with your gut. If you feel something doesn’t make sense, push for what you believe is right.

Living through COVID: a visual diary

ANZ’s Tom Opasinis shares his personal perspective through his illustrations, hoping one day they will be a reminder for generations to come of the rollercoaster ride of living through the COVID-19 pandemic.

This is the time to be slow

Three cities, three lockdowns, a ton of resilience. Ami Kui shares her experience of being in lockdown for the majority of 2020.

ANZ’s US office was in the epicentre of the US COVID-19 contagion. Its new leader joined as the crisis unfolded.