“Work helps remind me I am still who I was. It gives me a sense of purpose – it makes me feel good about myself.” 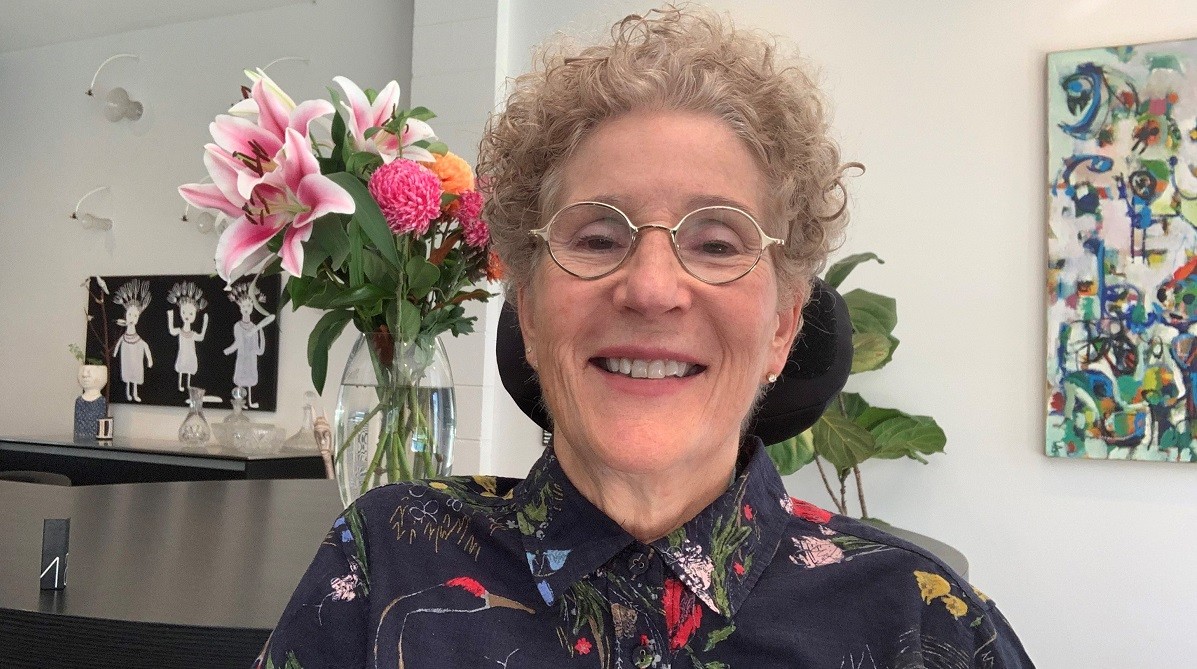 I’ve been with ANZ for 10 years and I am a senior adviser responsible for relationships with the CEOs and boards of ANZ’s institutional customers in South Australia. I’m also a director on several company boards.

(And also, as an aside, our current CEO Shayne Elliott was my first boss at ANZ.)

Around this time last year, Australia was sent into lockdown in response to COVID-19 and we embarked on a year like no other. It’s been challenging. It’s brought about change to the way we work, the way we interact and to our freedom – but it’s also been a testament to our resilience and ability to adapt.

Once you read my story, you’ll soon realise I am someone who is acutely aware of the importance of adapting.

Around three years ago my husband and I were in Wellington, New Zealand for my niece’s wedding. The day after the wedding we had been out for lunch with some friends and were getting an ice-cream down at the harbour – something I rarely do.

I sat and ate my ice-cream, watching all these people – young and old – jumping into the harbour. I’m a jetty jumper from years back, so it looked like a lot of fun. I distinctly remember watching one little boy. It would get to his turn and he would stand on the edge but he’d get scared and back away. He did this about five or six times.

I was 60 years old at the time and I thought to myself ”Well if an oldie like me can do it, that might give him some confidence’, so I approached him and said “Listen, I’m 60. So if I can do it, you probably can too”.

So then I jumped.

As soon as I hit the water, I felt this terrible pain. I was able to gingerly swim to the ladder and somehow climb the 10 steps to get up onto the pier.

Truthfully, I don’t remember much from there. I had one operation which was fine at the beginning but then we ran into some complications. There was swelling which caused my heart to stop twice so they had to do a second operation in order to save my life.

The second operation was a laminectomy, which is quite a common operation where the surgeon removes part or all of the vertebral bone to ease pressure on the spinal cord or nerve roots.

It was from the laminectomy I came out a quadriplegic.

Obviously this brought about massive changes in my life. I think being a naturally optimistic, happy person helped a great deal in adapting to the magnitude of what had happened. 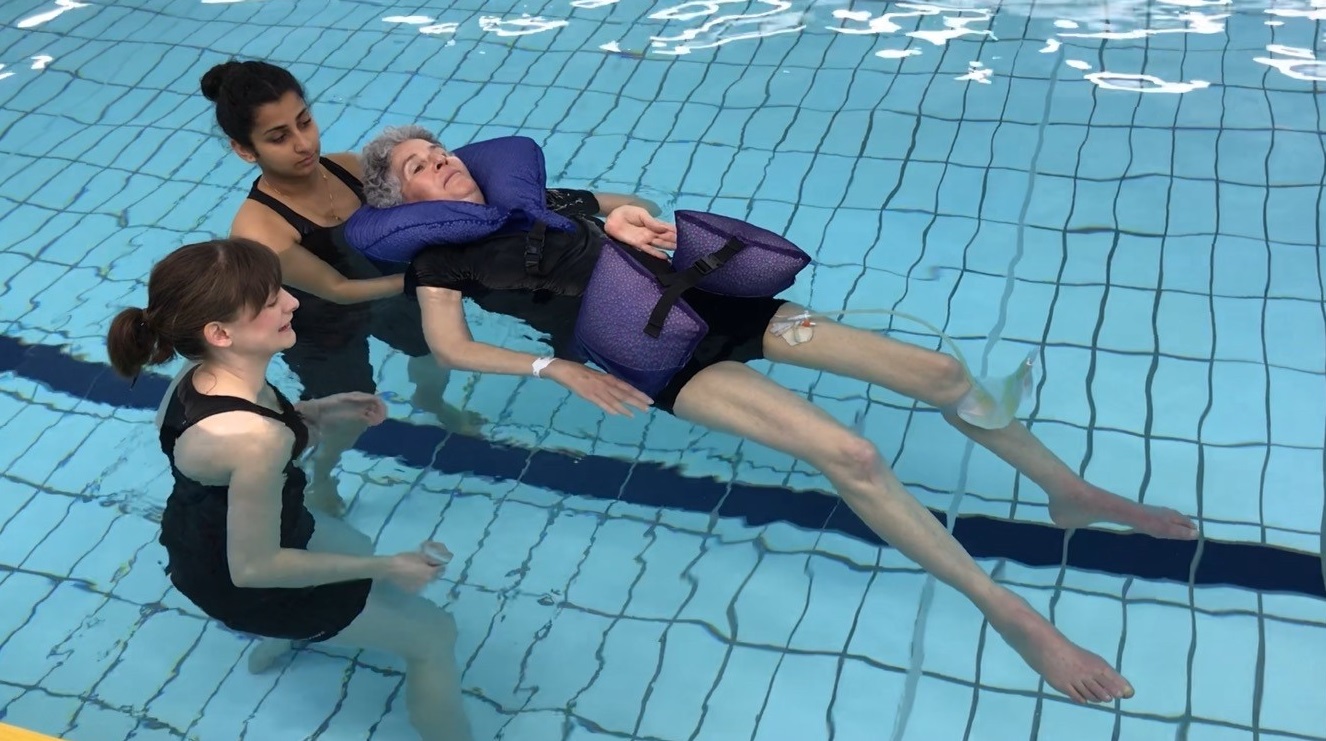 Water therapy in the pool around nine months into rehabilitation. 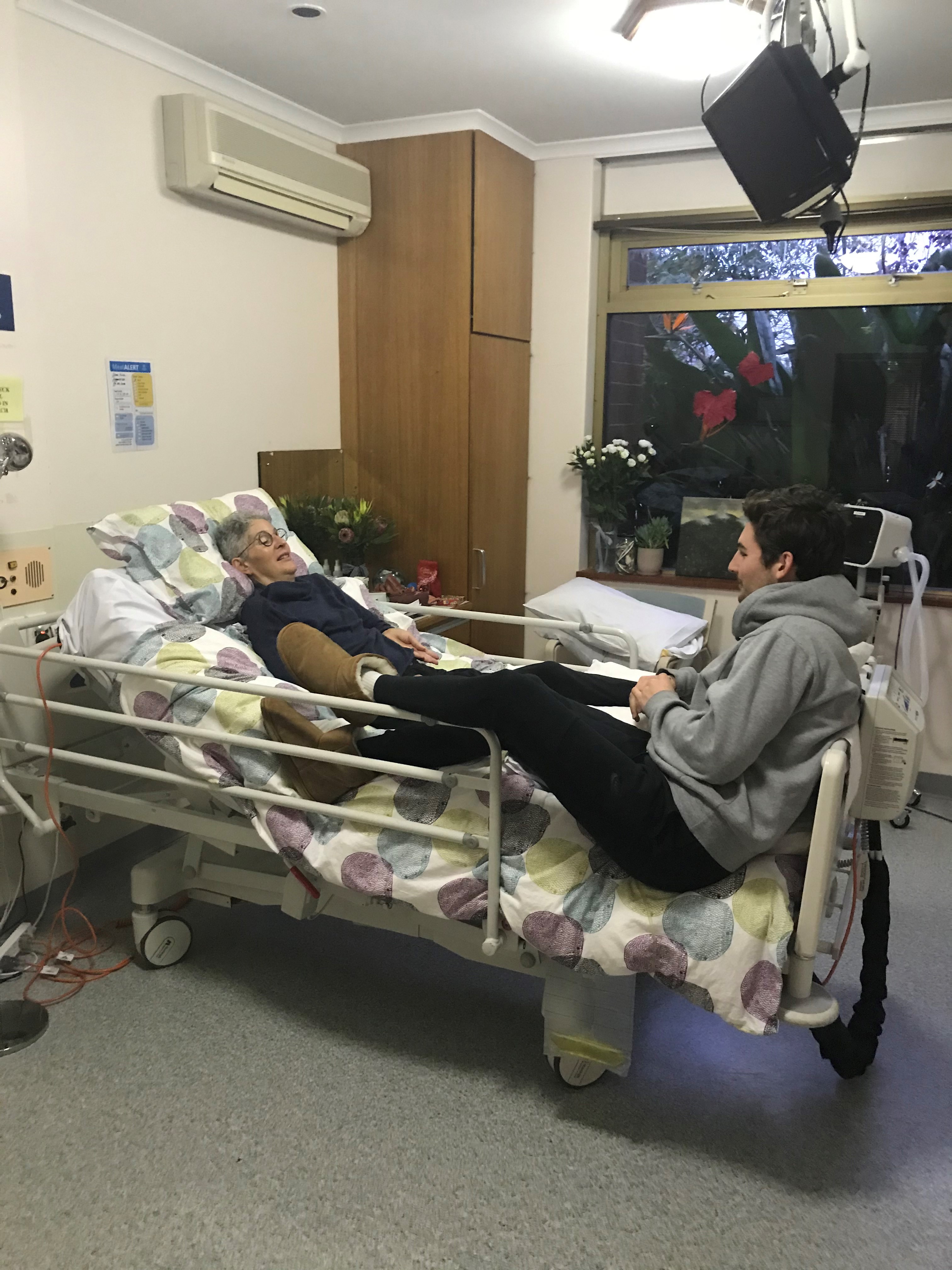 My son Peter at my hospital bed. 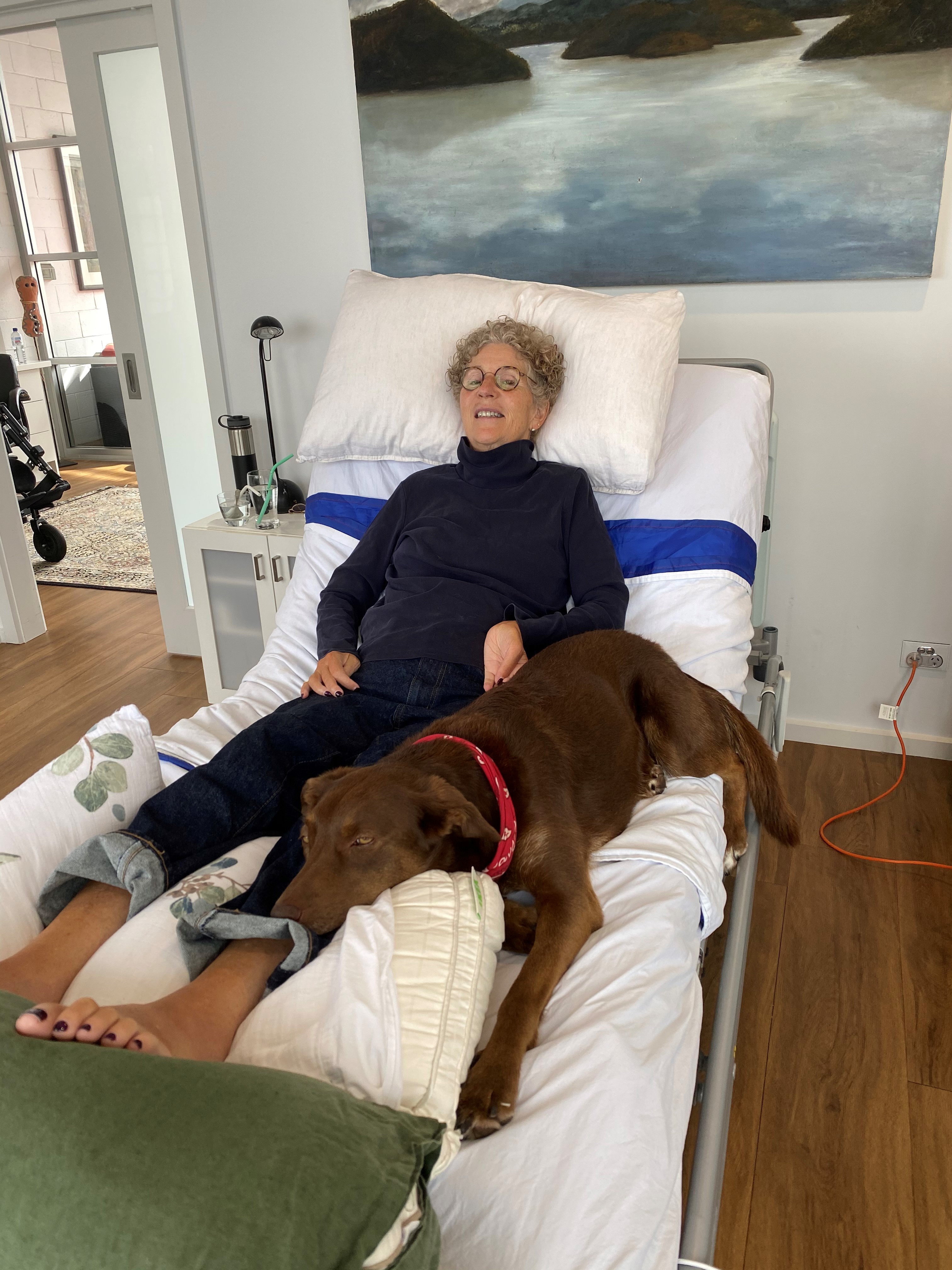 With my daughter’s dog Miso, a Kelpie (and the only one of my dogs that doesn’t treat me like a talking chair!) 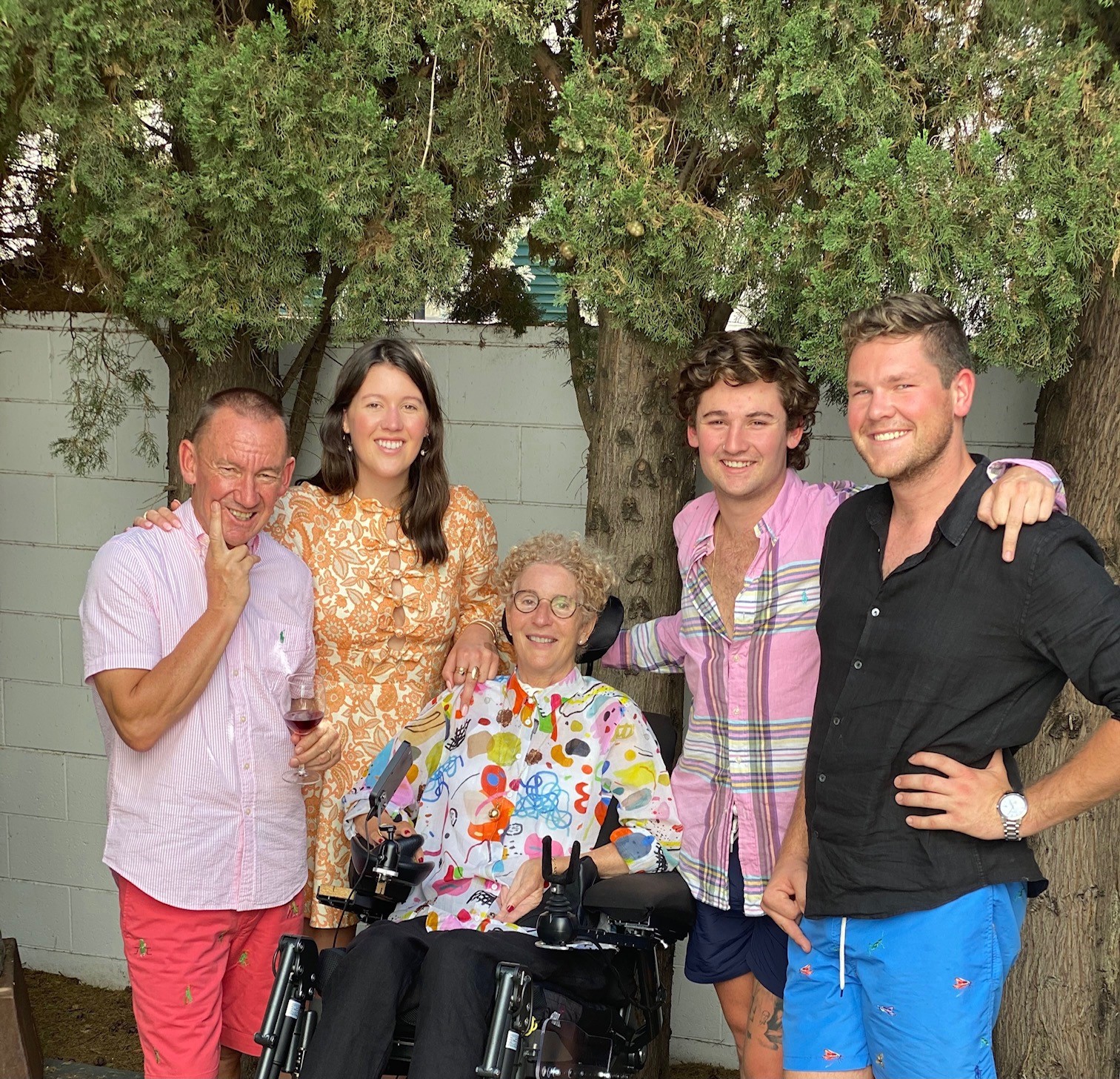 I don’t remember being upset in the early days - I just got on with things and focused on recovering and keeping positive for my husband and kids.

What’s interesting though, is that more recently – now that I’m better – the reality of what I can't do sometimes hits me in waves.

When this happens, I allow myself to grieve and wallow – but only for a short time. Then I remind myself how lucky I am – to be here, to have such amazing family and friends, and to have my work.

Clearly, I didn’t return to work overnight – I spent six months in hospital, 18 months in rehabilitation and I continue to need 24-hour care.

Throughout my recovery and the transition back to work ANZ patiently stood by me. I feel incredibly fortunate to work for an organisation that places so much importance on supporting its people.

My role stayed open and there was regular contact – but not too much. There was no pressure to return but when I did feel ready to go back, they worked hard to make sure I had the right environment – a desk that went up and down, a computer with voice activated software and a special earpiece.

ANZ helped me return to work and continue with my board commitments – I’m a director of Adelaide Airport, the Art Gallery of South Australia and Adelaide’s major hospitals.

Work helps remind me I am still who I was. It gives me a sense of purpose – it makes me feel good about myself.

But change is a constant. Just as I was getting into the swing of things, COVID-19 came. With an impaired lung it’s a reminder of my mortality and the need to appreciate and make the most of every day.

There are also moments when I just feel…sad. When I think about the fact that I will never see my mother again as she lives in Montréal. That I can’t nip to Sydney to take my kids out for dinner and see the house that my daughter just bought. That I can’t hug my husband again.

The pandemic has brought a whole new way of working – which has made me a quantum more productive. With the bank’s informed perspective of what’s going on, CEOs have been reaching out to talk to me about their businesses and glean our observations.

I don’t know what 2021 has in store for us but I do know it will bring greater connectedness and with that comes many other positives.

The Wellbeing Conversation: the full series

The Wellbeing Conversation series, hosted by Paralympian and ANZ Ambassador Dylan Alcott and mental health advocate, Brad McEwan, features unscripted conversations with ANZ leaders and external experts on a range of topics relating to wellbeing to help​ us navigate COVID-19 and beyond.

In the blink of an eye

I am writing this to you from Hubei, the center of the coronavirus outbreak in China… Ami Kui shares not only what helped her get through, but thrive, during months of isolation.

Simone Tilley, Head of Retail Distribution at ANZ reflects on a year like no other, her career highlights and provides her thoughts on the year ahead.