“We’ve always said it starts with the vineyard. If you don't get the vineyard right it doesn't matter what you do, you can't make good wine.” – Dennis Canute 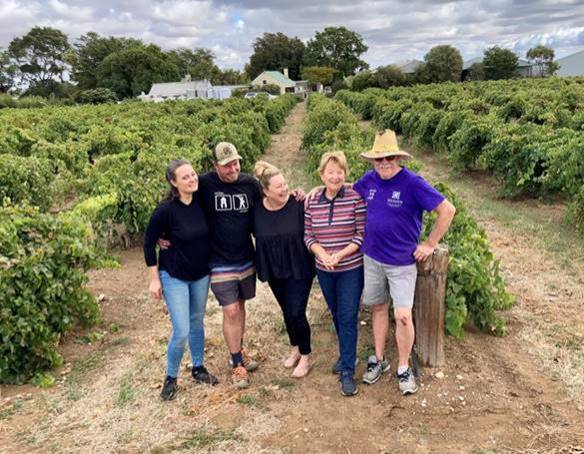 Forty years ago, Christine and Dennis Canute bought 40 acres of rundown vineyard in the heart of South Australia’s Barossa Valley. They could never have imagined where their hard work would lead them.

“We started this business by chance,” says Christine. “On a Sunday afternoon we drove past and said ‘yes, that's it’. At the time this vineyard came on the market it was cheaper than a two-acre hobby farm! But it had to be completely restructured. It was very run down. But it was an endeavour and we loved it.”

After initially selling their grapes to other wineries in the Barossa Valley, in 1992 Dennis and his friend Russell decided to make a barrel of Cabernet Sauvignon (Rusden is a combination of Russell and Dennis). In 1994 their home-made Shiraz was good enough to justify further research and development and in 1997 they expanded to produce Shiraz and Grenache along with Cabernet Sauvignon.

Today Rusden Wines remains a family-owned winery producing high-quality, hand-made wines from the fertile white sand over red clay earth of the Barossa Valley. It’s a family business in the true sense of the word with three generations now involved.

This is a great story of starting small, growing together and managing the transition to the next generation. All family businesses face this challenge at some point and for the Canutes it happened a few years ago when Christine and Dennis handed over to their son Christian.

“When I was in high school, all I wanted to do was work on the vineyard. Mum and Dad were both working as school teachers to have the vineyard. So they said you're not working on the vineyard, go and get a job somewhere else,” Christian says. “But as we started making wine and started finding little markets for it, we could work out how we could sell another five tonnes here or another 10 tonnes there.”

Once the funds started flowing, Christian would take proposals for new equipment to his father – maybe a new press or a new fermenter. Meanwhile, Dennis’s background in teaching helped him instil the importance of prudent financial management on his son, starting with the financial wellbeing principle of spending less than you earn. I’m pleased say Dennis believes ANZ played a critical supporting role here.

“The bank manager made me do a budget, which is the best thing that could have ever happened. Because then whenever Christian came along with what he wanted to buy, I’d put it in the budget it and see how it looked.” Dennis says.

ANZ has supported the Canutes since the early 1970s and agribusiness manager Shane Pudney has been with them since 2000. This close relationship has been really important.

“Every time we need something like car finance or to build a shed or buy a vineyard next door, Shane is on the phone and it happens,” Christian says. “He’s also really involved in the community and he's just a really good bloke to have around.”

With ANZ’s support the family recently purchased the vineyard next door. This has given them more land to experiment on and secured the supply of 30 per cent of the grapes for their most famous wine – the Black Guts Shiraz.

The operation has grown from processing about 10 tonnes of grapes in 1997 to more than 100 tonnes. Their wines are sold domestically and internationally with Australia accounting for about 70 per cent of sales.

Retaining family ownership and remaining in control of their own destiny is also a priority for the Canutes.

Dennis describes the succession as a natural progression rather than an abrupt transfer and the family’s close bond has been crucial to its success. Christian honed his winemaking skills on the vineyard from a young age and their daughter Hayley had a flair for the financial side of the business. She’s now the General Manager.

“We can work very well with them because we've had a lot of honesty about what each of us is capable of,” Christine says. “We're very proud of our children and the way they've involved themselves in our life. We are very proud of the way the property has developed. We've now got a really viable business.”

Dennis adds “I think the most special thing for me is my relationship with my son. I love telling people I work for my son. I can go home and let him worry about it. I am just so proud of what the kids have done with the business. I think we made the right decision to get out of the way so that they could do whatever they want to do.”

But not too much out of the way: “We're never going to not be part of it because when you spend 40 years in a place, it's always going to be part of us. But we just feel like it's in very, very good hands.”

When intuition and taking risks pays off

From a home basement to having more than 90 stockists across Australia and international markets, this fashion brand is leading the way.

After 160 years of operation, Coopers Brewery has stayed independent and true to its SA roots with ANZ as its partner.