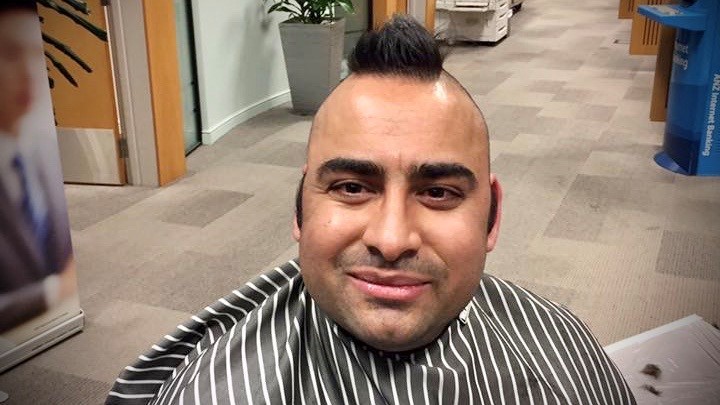 For most people touched by cancer it is deeply personal.

That was certainly true for Hastings-based ANZ consultant Sukhdeep Singh, diagnosed with leukaemia five years ago.

"It was a month after my son was born, so I took parental leave instead of sick leave. I didn’t want to tell anybody why I was really taking time off,” says Sukhdeep.

But during his treatment, the Cancer Society offered Sukhdeep support, including counselling sessions, which he says changed his thinking. 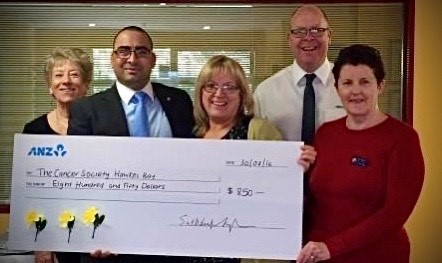 ANZ consultant Sukhdeep Singh (second from the left) is to be awarded a Hastings District Council Civic Honours Award, the first Punjabi Indian to do so.

"In Indian culture you don't tell people when you are going through tough times – not even your extended family," he says.

“But after doing the counselling I realised it is important to share what's happening, certainly with your family, but also with your co-workers and employer.”

Now fully recovered, Sukhdeep leads Daffodil Day fundraising efforts in the Hawkes Bay by shaving his head for the charity.

This year will be his fifth year in a row and he will be joined by branch manager  Peter Gray for the “Brave the Shave” event  at the Hastings branch on 4:30pm on Friday 28th. Last year Sukhdeep ended up with a Mowhawk.

"It's a big thing for me to help raise funds for the Cancer Society because they were there for me when I needed it and help so many people when they are going through a tough time."

"It's a big thing for me to help raise funds for the Cancer Society because they were there for me when I needed it."

The night before Sukhdeep shaves his head, he will be awarded a Hastings District Council Civic Honours Award, the first Punjabi Indian to do so.

The award recognises a decade of community work and volunteer fundraising, which has seen him help raise over $400,000 for six different non-profits groups.

"I almost cried,” he says when he found out he would be receiving the award.

“I felt really humbled because it's a huge privilege and I thought there are loads of other people more deserving than me."

In his role as the president of the Hawkes Bay Multicultural Association Sukhdeep has helped organised the annual International Cultures Day, and lead efforts to support ethnic communities in the area during the Covid-19 lockdown.

"I think helping people is in my blood,” says Sukhdeep.

“Back in India, my father set an example for me, always giving back to the community because, as he says, its the community that shapes our future and our kid's future."

"The biggest award for me is people come and saying to me “hey, thanks very much for helping us” That's an award for me every day.”

There are four easy ways to donate this Daffodil Day.

How Covid-19 Made Women’s Refuge Stronger

Seventeen of New Zealand’s top business and government leaders and chefs have come together to raise over $225,000 for the Auckland City Mission.

Antonia Watson: The more we can share our working from home experiences, the better they will become for us all. So how does a CEO work from home?

Aiming to support those most in need, ANZ Fiji Staff Foundation is helping the Farm Food Bank project, a not for profit organisation that works with women and children in remote communities.

ANZ consultant Sukhdeep Singh is to be awarded a Hastings District Council Civic Honours Award for his charity efforts, the first Punjabi Indian to do so.

The Salvation Army’s Tim Hamilton tells us how the charity’s activities changed during the pandemic and how ANZ NZ’s $500,000 donation helped it meet an unprecedented demand for food.

Wellington based charity, Kiwi Community Assistance saw three times increased demand for their services during lockdown. The ANZ New Zealand Staff Foundation donated $25,000 to the charity which helped them keep up with demand.

ANZ NZ is proud to have received Rainbow Tick certification for another year.

Christchurch shootings - reflections a year on

Many of those injured and killed in the mosque shootings of March 15th 2019 in Christchurch were ANZ customers, and well known to the team at the Upper Riccarton’s branch. A year on, Business Banking manager Shainaz Ali reflects on the tragedy.

ANZ is trialling a pilot scheme to help Recognised Seasonal Employees (RSEs) send wages home to their families and communities safely, and understand how to best use their money when it gets there.

The number of students who used payday lenders halved after completing a financial education course, according to ANZ’s latest MoneyMinded impact report.

All New Zealand stands to gain from addressing the waterways challenge

ANZ sees improving sustainability standards to internationally recognised levels as crucial to meeting the demands of global consumers and securing the long term future of many of New Zealand’s export categories and tourism.

More than 50,000 native plants and trees have been planted along waterways across nine New Zealand regions since June as part of Sustainable Coastlines and ANZ’s Love Your Water Tour.

ANZ was a joint lead manager on a $600 million Housing New Zealand Wellbeing Bond this week, which will help fund investment in new or upgraded sustainable social housing.

Since becoming CEO Antonia has taken the opportunity to evaluate what’s important to the bank, its employees and customers. And culture has been top of mind.

More ANZ employees are staying at home for longer as their family’s primary caregiver since the bank announced it was extending parental leave last year.

As Daffodil Day approaches thousands of Kiwis will be out fundraising and collecting for the Cancer Society’s annual appeal on Friday, August 30.

Matariki - in my own words

Māori voyagers would use the stars to guide them to their futures and keep them on track towards their destinations – Matariki does the same for me.