“I look forward to Kaleidoscope every year and start planning my picture in January. A week before the deadline I’m stressing out and my fingers hurt but it’s worth it”. 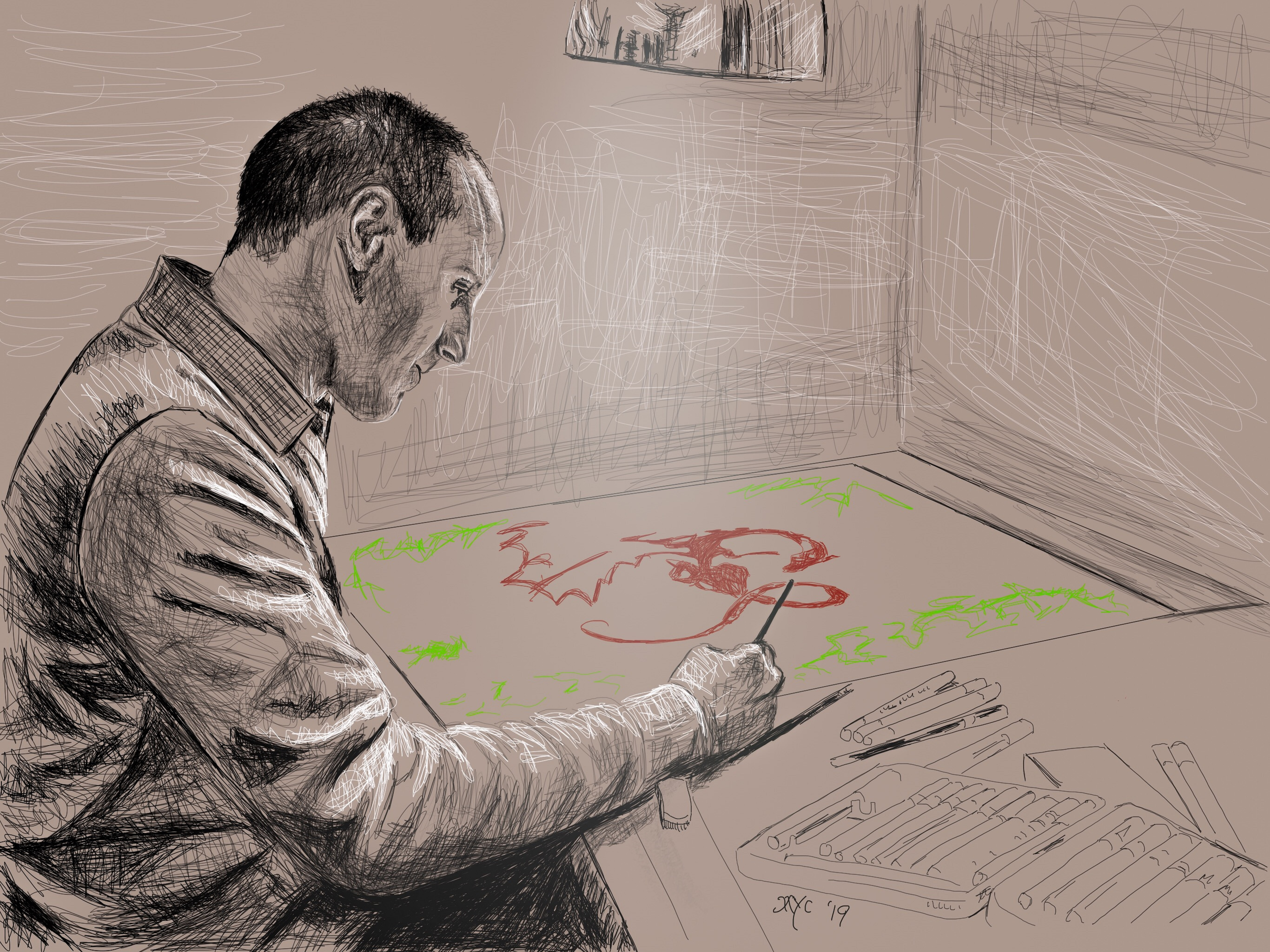 'The secret life of Dan' Illustration by: Melissa Currie

Imagine this: the unassuming, quietly spoken fellow with an English accent who sits a couple of seats down from you at the office, with whom you’ve made small-talk in the kitchen about the lack of cutlery - is actually an ex-professional soccer player who played for Manchester United.

Even the intimidating senior leader you’ve shared a lift with - and had that one, slightly forced, slightly awkward conversation with about how you bought your lunch from the same café downstairs  (“Ha! Same same” *nervous giggle*) – is actually also an exceptionally gifted musician who has released three albums and is well on his way to his fourth release.

All by day mild-mannered (well, maybe not mild-mannered) office ordinaries. By night, if not exactly SuperPerson then people with extraordinary powers.

The secret life of Dan

If you hold a credit card with ANZ, it’s highly likely you’ve spoken to Dan Carney on the phone. He’s possibly assisted you with understanding your fees and charges or helped when your card’s been lost or stolen.

Your conversation may have lasted a few minutes and you would have hung up the phone with not an inkling that the helpful gentleman you spoke to spends a good portion of his time working tirelessly as an illustrator – and an incredibly talented one at that (you would however have come away more informed about the workings of your credit card).

There really is more than meets the eye when it comes to Dan. Apart from ‘Dan at ANZ Customer Assist’ and ‘Dan the Artist’, to his two daughters Audrey (7) and Ruby (4) he is simply known as ‘Daddy’.

Exactly how does Dan fit all these versions of himself into one life?

“I try to draw for at least one hour every night, provided my girls co-operate and go to sleep at a reasonable time,” he replies.

This means bedtime for Dan is generally around midnight. And then he’s up before sunrise at 5:00am to prepare for his work life at ANZ. It’s certainly an enormous commitment to his craft, evident in the intricate detail of his illustrations.

One illustration generally takes 60 hours which equates to a timeline of three months to complete with his two full-time jobs (as ‘Dan from ANZ Customer Assist’ and ‘Daddy’) to carry out. 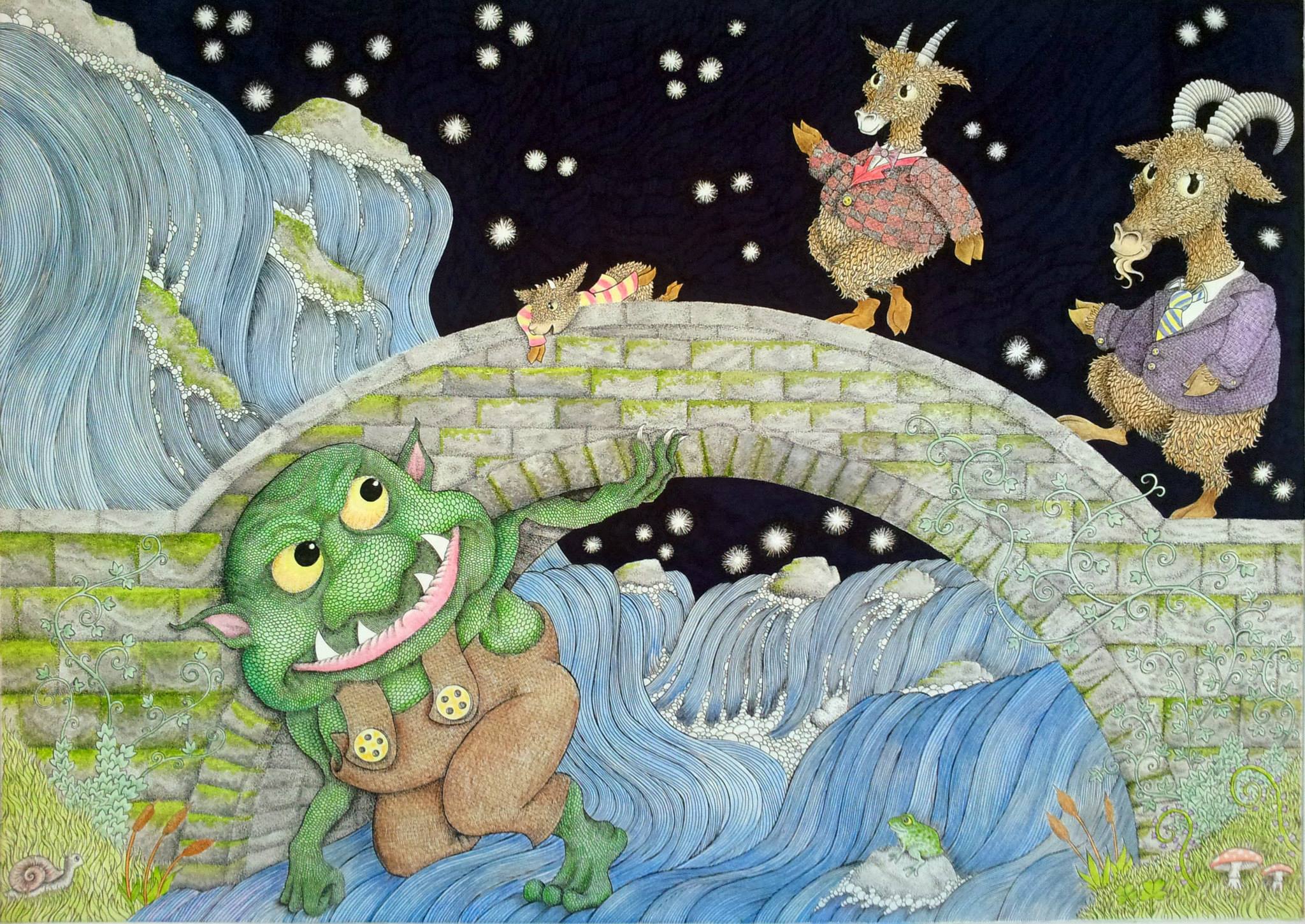 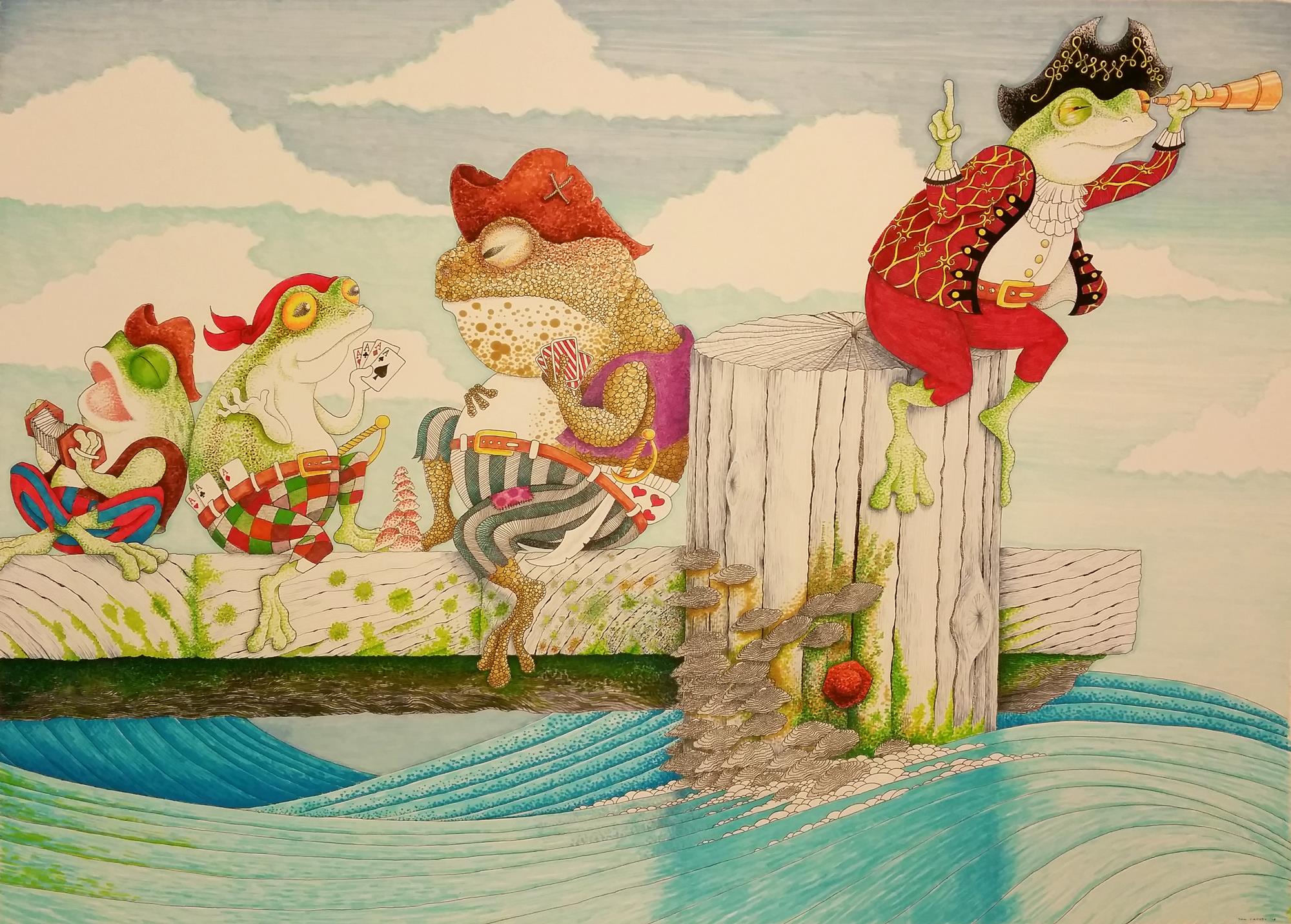 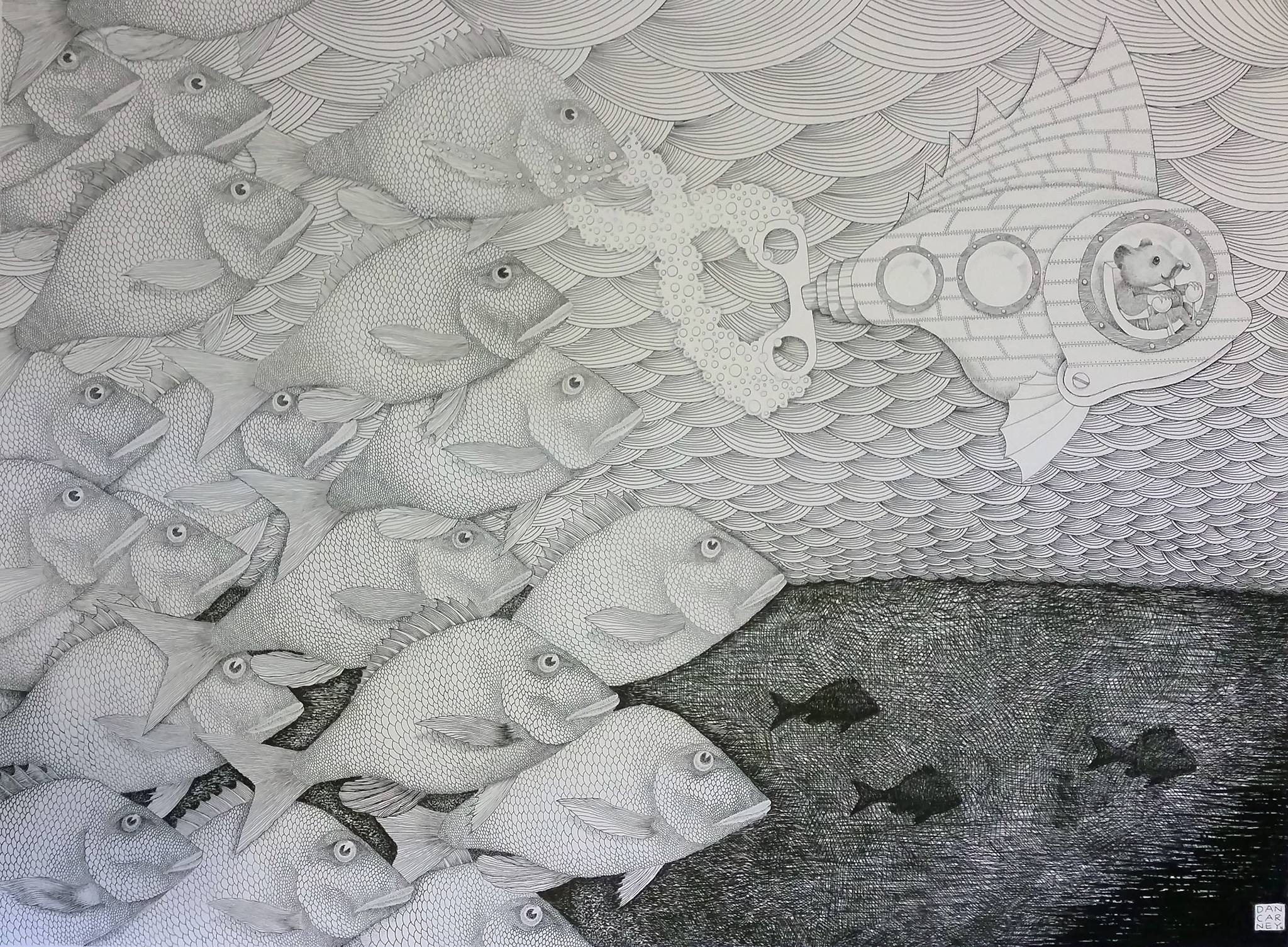 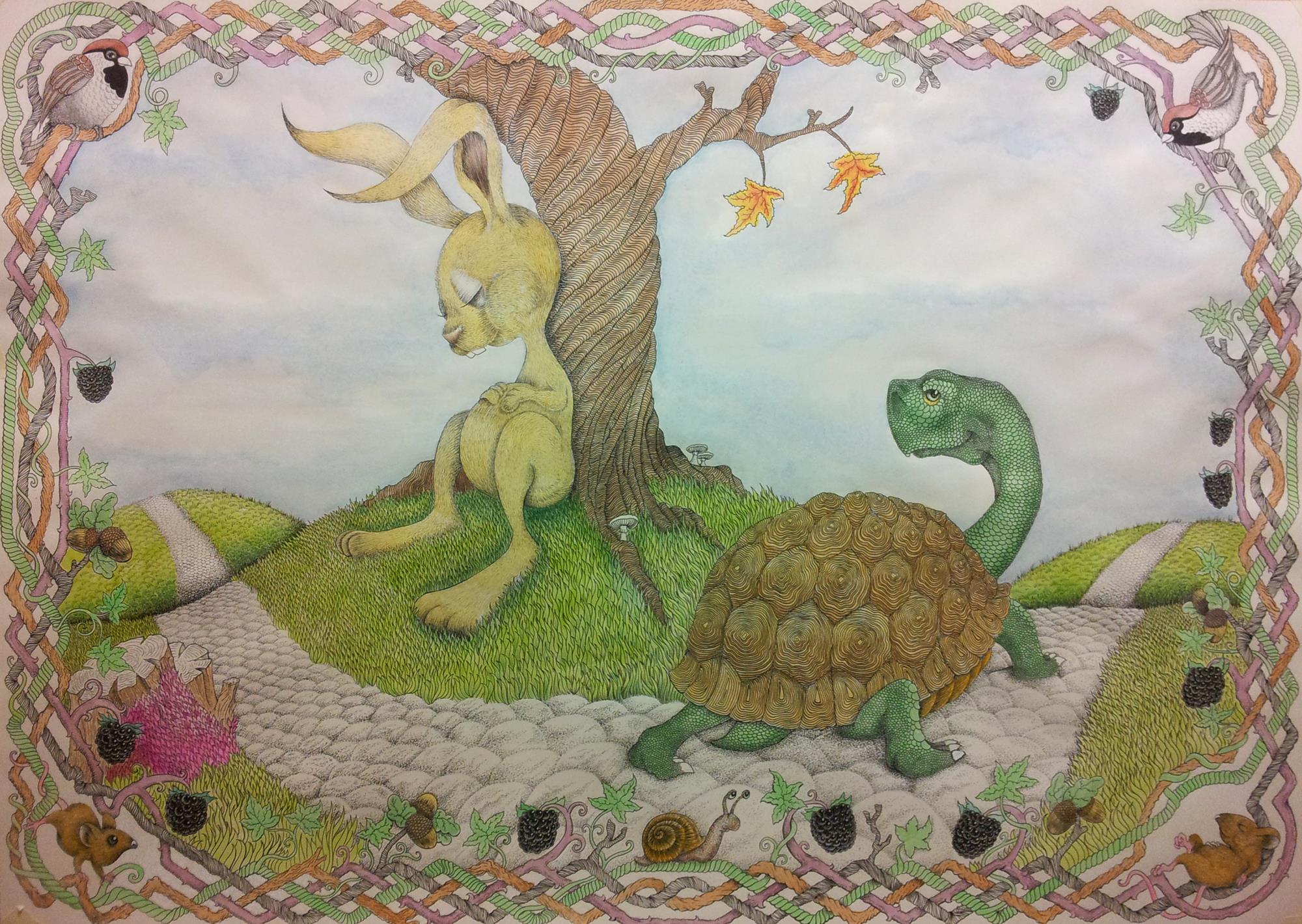 Dan has been at ANZ for 17 years but he’s been drawing his whole life. Around 10 years ago, he reduced his hours to part-time in his job at ANZ to do a Diploma in Illustration which took two years to complete.

“I was about thirty years old at that time, or pushing thirty so I thought ‘I’ve really got to make this happen before I get much older’” he reflects.

Kaleidoscope is an annual art auction run by a group of dedicated ANZ employees. All the members of the Kaleidoscope working group hold their own full-time roles and masterfully coordinate the auction every year with 100 per cent of the proceeds from the sale of the art going to a different charity each year.

This year, the proceeds from Kaleidoscope will go to Foodbank – Australia’s largest food relief organisation who not only play a lead role in fighting hunger, but also play a vital part in tackling the issue of food wastage in Australia.

Transport is the biggest barrier to Foodbank being able to both rescue and distribute essential food and groceries for vulnerable Australians. The money raised through this year’s charity art auction will go towards Foodbank’s Regional Transport Program.

In 2011, Dan moved into the ANZ Centre at Docklands in Melbourne as he had started in a new role. His colleagues knew of his love of drawing and many made the suggestion that he enter the Kaleidoscope.

He has submitted a piece every year since and despite the time, effort and the fact there is no personal  financial trade-off, Dan believes it really is its own reward. “I look forward to Kaleidoscope every year and start planning my picture in January. A week before the deadline I’m stressing out and my fingers hurt but it’s worth it.”

When asked what the most rewarding thing is about making a contribution, he replies “to have other people view your work and appreciate it”.

And that’s perhaps propelled him one step closer to achieving that elusive childhood dream.