No time to waste

It’s hard to believe but every year, around 200,000 tonnes of solid waste and incineration ash is sent to a small island off the coast of Singapore. That’s almost the weight of a Boeing 757-200.

In 2011, it was estimated the landfill would last until 2045. At the current rate of disposal, however, it’s believed the landfill will run out of space much more rapidly, and will only last to 2035 – a dire indicator for global wastage.

About 79 per cent of domestic waste generated is incinerated at one of four waste-to-energy (WTE) incineration plants every day in Singapore. However, the more waste incinerated, the higher Singapore’s carbon footprint which contributes to global warming and climate change.

The resulting incinerated ash as well as other non-incinerable waste then makes its way to Semakau Island.

Located 8km south of Singapore, Semakau Island (Pulau Semakau) is not your average island destination. Built in 1999 to meet Singapore’s waste disposal needs when the last remaining landfill on the mainland was closed, Semakau is now Singapore’s only landfill covering 350 hectares.

ANZ staff in Singapore were acutely aware of the country’s responsibility to minimise wastage and wanted to raise awareness about how quickly the landfill is nearing capacity.

An ANZ Singapore staff member wrote in to the Green Ambassador team and suggested visiting the landfill could help highlight the importance of eco-consciousness for local and global staff. He felt that with letting people see and understand exactly what happened with the trash they throw away on a daily basis would help to impress upon them the urgent need to reduce waste and recycle. 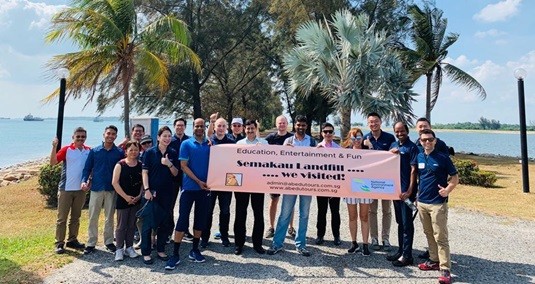 Around 70 ANZ staff and customers went on an educational tour to Semakau, where they learned more about Singapore’s waste management process and the importance of the country’s movement towards zero waste.

“We had a fantastic response from our customers and colleagues who joined us,” says Bruce McKenzie, an Associate Director at ANZ and member of ANZ Singapore’s Green Ambassador team. “We learnt how Singapore manages its waste and the increasing importance of Reduce, Reuse and Recycle.”

ANZ Singapore’s Green Ambassador Team comprises a group of employees who are strong advocates for sustainability and working alongside colleagues, customers and the broader community to help improve environmental sustainability.

Pic: Staff hear more about how the island is set up

David Leong, Head of Specialised Industries for ANZ says it was important for staff and customers to see how they can help keep Singapore clean and sustainable amidst a growing population in a very industrial and fast- paced city.

Serene Lim, a Relationship Manager for ANZ Singapore, agrees. “It’s been really eye-opening - we can all do a lot more to help.”

Seeing the island up close provides a completely new perspective on sustainability. Manish Shroff, a Director for ANZ Singapore says “It really reinforces the fact we need to be much more sustainable in the future.” Pic: Staff take a guided tour of the island

With the landfill continuing to be on-track to reach capacity early, a keen focus on how Singapore can minimise wastage impacts in needed to ensure long-term sustainability.

There are simple steps everyone can take to reduce their personal waste and contribute to a future with less plastic.