A buzz for the bees

Seven months on from receiving a Seeds of Renewal grant, ANZ CEO Shayne Elliott recently caught up with Fiona Chambers, CEO of the Wheen Bee Foundation to find out what the grant meant for them.

Shayne Elliott: I understand the grant your charity received is being used to further support the work you’re doing conserving the green carpenter bee on Kangaroo Island. What difference does a grant like this make?

Fiona Chambers: A huge difference! The green carpenter bee is a native bee rather than a honeybee, which means it’s not managed by beekeepers the way honeybees are. It’s often very difficult to get funding for native bees and native conservation type work.

It is an iconic native bee to Australia and only exists on Kangaroo Island and a very small pocket in the Blue Mountains. It has been lost and become extinct to all the other parts of Australia where it used to live. The Seeds of Renewal grant has been so important in raising awareness about the importance of these native bees, not just for food security but for ecosystem health and the role they play as pollinators in our native environment.

Shayne Elliott: Kangaroo Island was severely impacted by the bushfires earlier this year, how damaging was that to your bee program?

Fiona Chambers: It has been absolutely devastating. At the time the bushfires hit, we had about 450 artificial nesting substrates out in the national park; 95 per cent of that park was lost. In survey work we’ve done since the fires, less than one hundred nests were found in the remnant areas and in places where the program wasn’t functioning. It’s meant the urgency of this program has been stepped up, it’s just multiplied.

Shayne Elliott: There is quite a concerning decline, isn’t there, in the number of bees globally?

Fiona Chambers: Yes, it’s multifactorial but a lot of it is driven by a thing called the Varroa mite.

Australia is in a really fortunate position to be the only continent in the world that doesn’t have this mite. So our biosecurity efforts to keep the mite out of Australia are really important because the damage to not just our bee keeping industry but all of our pollination-dependent industries, our agricultural and horticultural industries, will be just devastating.

Shayne Elliott: Part of our purpose at ANZ is to shape a world where communities thrive, it’s great to hear the grant has helped the When Bee Foundation.

Fiona Chambers: We have seen bee awareness certainly increasing in the community. We're excited to be launching a new program in spring 2020 to help guide community replanting efforts following bushfires. We're working to ensure people are thinking "trees for bees" and planting to support our wild pollinators.

Seeds of Renewal is such a fantastic program because of the way in which it has really united the community. When I went to Kangaroo Island and talked to the stakeholders who I thought would be interested, it was amazing how they came together to back and support this, and it brought together community members that in other situations, would not talk to each other in the way they did because they really did unite and get behind this project.

I'd highly recommend communities apply for a Seeds of Renewal Grant. It was a simple process and the support provided by ANZ and FRRR has been fantastic.

Buzzing, bustling, beautiful bees are critical for the preservation of ecological balance and biodiversity in nature. They are the world’s most important pollinator of food crops.

But bee populations are at risk. Destruction of their natural habitat, intensive farming practices, and pests and diseases are driving their decline at an alarming rate.

The Green Carpenter Bee is no exception. Already endangered, this iconic species was further threatened by recent bushfires in Australia.

“There were only two remnant populations of the species remaining in Australia - one on Kangaroo Island and the other in the Blue Mountains, NSW,” says Fiona Chambers, Chief Executive Officer of Wheen Bee Foundation.

Now a grant through the Seeds of Renewal program will deliver a critical lifeline to the Green Carpenter Bee population on Kangaroo Island.

Fiona believes the grant funding has come in the nick of time: “with both these habitats having been badly damaged by the recent bushfires, conservation efforts need to be urgently fast tracked and expanded if this iconic native bee is to be saved,” she says.

The $15,000 grant will assist with artificial nesting materials and is part of an interim conservation strategy to support threatened bee populations until the local native Banksia flora recovers to pre-bush fire levels. It will also help raise awareness of the plight and importance of the bees in the environment. 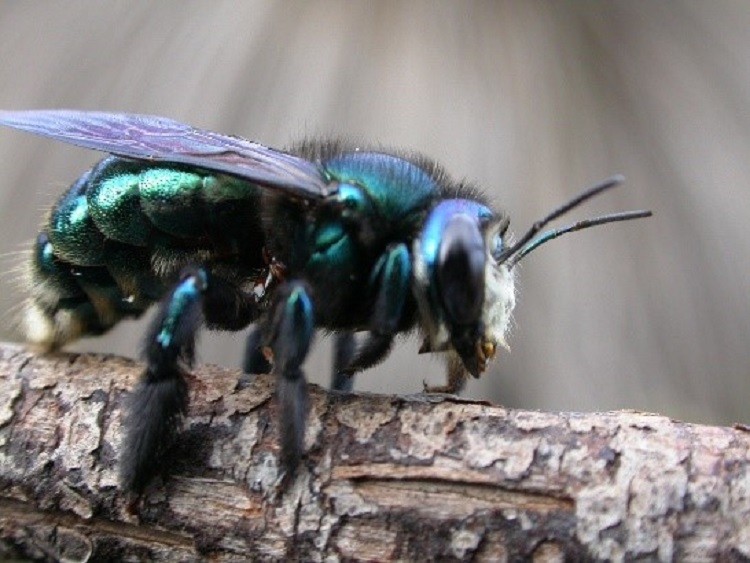 Administered by the The Foundation for Rurual & Regional Renewal (FRRR)  ANZ Seeds of Renewal is a grants program designed to help build vibrant, sustainable rural communities and to support the ongoing prosperity of regional Australia.

The program provides grants of up to $15,000 to community organisations. Since 2003, it has provided $5m to support more than 800 community groups.

In addition to the grant, ANZ Group Executive Australian Retail and Commercial Banking Mark Hand has committed a further $10,000 to support Kangaroo Island Council's Home Expo in the wake of the fires.

"Spending time with customers on Kangaroo Island and hearing first-hand about the challenges they are facing, it is clear this is strong and supportive community focused on restoring the Island back to the nature and wildlife sanctuary it is known for," Mark says.

With 56 homes lost and many damaged, the need to rebuild a significant portion of Kangaroo Island is clear. Local council and a government-led recovery team, with the support of ANZ, are coming together to support the many families who face the challenging task of repairing and rebuilding their homes.

"It is critical for us as we move forward to have our Australian business leaders see the situation first hand at a grassroots level. It is likely to be a long haul recovery and we need as much support as we can get," says Michael Pengilly, Kangaroo Island Mayor.

The Home Expo will bring together businesses with expertise in building, fencing, hardware and local services to provide advice and answer questions face-to-face. ANZ will host information booths and run short seminars to educate residents looking to rebuild on the options available to them.

"The Seeds of Renewal Grant to The Wheen Bee Foundation and our sponsorship of the upcoming home expo are just two of the ways we are supporting customers in the region during this period of recovery and rebuilding," says Mark.

With the support of a $15,000 ANZ Seeds of Renewal grant, an indigenous theatre company was able to take its show to schools across 10 remote locations in North Queensland, allowing students to see their cultures and stories represented on stage.