Locked down with nowhere to stay 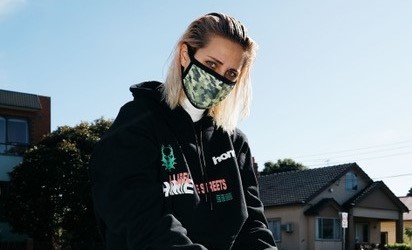 For some people, restrictions put in place to combat the COVID-19 pandemic have meant they no longer work in an office or are able to catch up with friends at the pub on the weekend.

But for the almost 120,000 Australians who have insecure or no housing to go to each night, these restrictions have added another complexity to already difficult circumstances.

“Vulnerable Australians are following the rules and being compliant with things like mask wearing.” – Nick Pearce

CEO and co-founder of social enterprise HoMie Nick Pearce says many people experiencing homelessness are already behind others before the hard social shutdown begins.

“It’s an uphill battle," Nick says. "These people were already doing it tough but now it’s even tougher.”

Founded in 2016, HoMie is a streetwear label which provides training pathways for vulnerable young Australians and regularly runs VIP shopping days where young people are welcomed into the store to shop complimentary brand-new HoMie garments and beauty services.

“What a lot of people don’t realise is that vulnerable Australians are following the rules and being compliant with things like mask wearing,” Nick explains. “It’s such a shame that their character is often misrepresented.”

HoMie recently launched a one-4-one campaign where for every sale of a face mask, another will be donated to a person affected by homelessness or hardship. This means people in need can remain compliant without having to worry about using what funds they may have for acquiring a mask to keep them safe.

“The Stage 4 restrictions in Melbourne mean we can’t train staff in our retail store as we would normally so trainees are now learning about distribution by helping deliver the donated masks to youth services,” Nick says.

But Nick adds there are practical solutions to help vulnerable Australians experiencing homelessness – the main one being access to housing. He says the government’s funding of temporary housing in hotel accommodation – which has recently been extended until April 2021 – is welcome relief for those who need the help.

“However, that needs to complemented by a sustainable livelihood. This includes meaningful work and access to the things we all are often very privileged to obtain,” Nick explains. “It’s a complex issue but the solutions are quite logical and straight-forward. We need to unite and collaborate on them.”

In 2019, HoMie was awarded $A15,000 as part of ANZ’s community foundation grants to help fund the HoMie Pathway Alliance program.

Young people apply through a partnered Community Support Service to participate in an eight-month paid retail internship at the HoMie Street Store or a HoMie Pathway Alliance trained business.

When they graduate, the interns have earned:

Ultimately, Nick says the key to helping end homelessness in Australia is education.

“It’s so important for people to learn more about what homelessness really means and what the contributing factors are for someone finding themselves in a vulnerable position as well as what solutions are available.”