“We saw a lot of each other and often had lunch together and on the weekends also played golf together.  The rest is history - we were married in June 1971.” 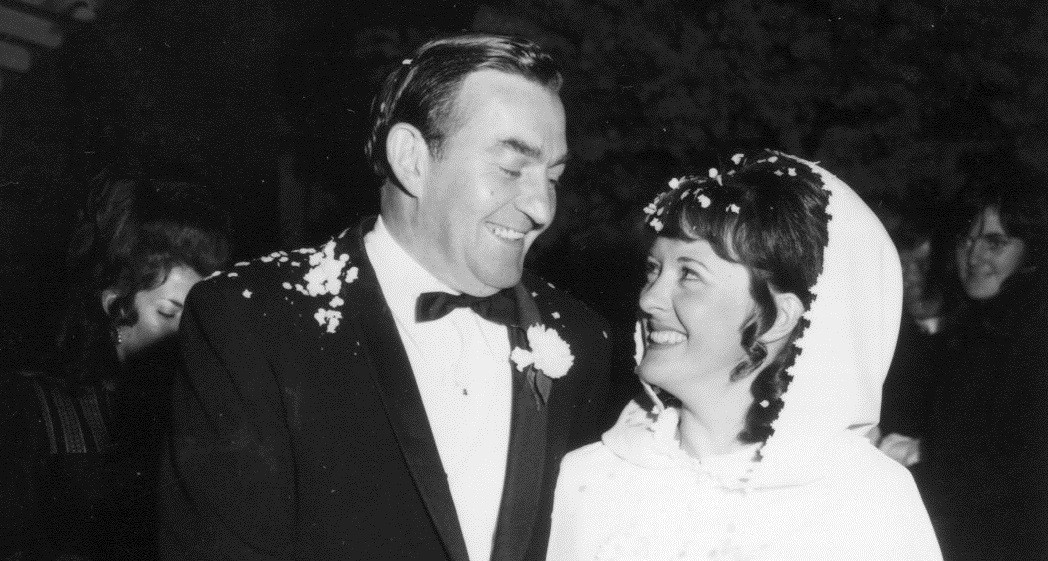 Gerry and Fay McPherson on their wedding day in 1971

I met Gerry through working at ANZ, but in a bit of a different way.

I joined ANZ in 1963, it was a big change to be working in the city. Despite the long journey from Croydon in Melbourne’s east, I was glad I made the move.

The year was 1967 and it was my father who introduced me to Gerry. We lived in a house on the course at Croydon Golf Club where my father was the Manager. He arranged for me to play golf in a Mixed Foursome Competition with “a very nice man who also works at the ANZ Bank".

Gerry and I enjoyed playing golf together that day and he confided to me later while we were sitting in the clubhouse his wife had passed away and his brother, who was a member of the Club had persuaded him to join as well and play golf with him. 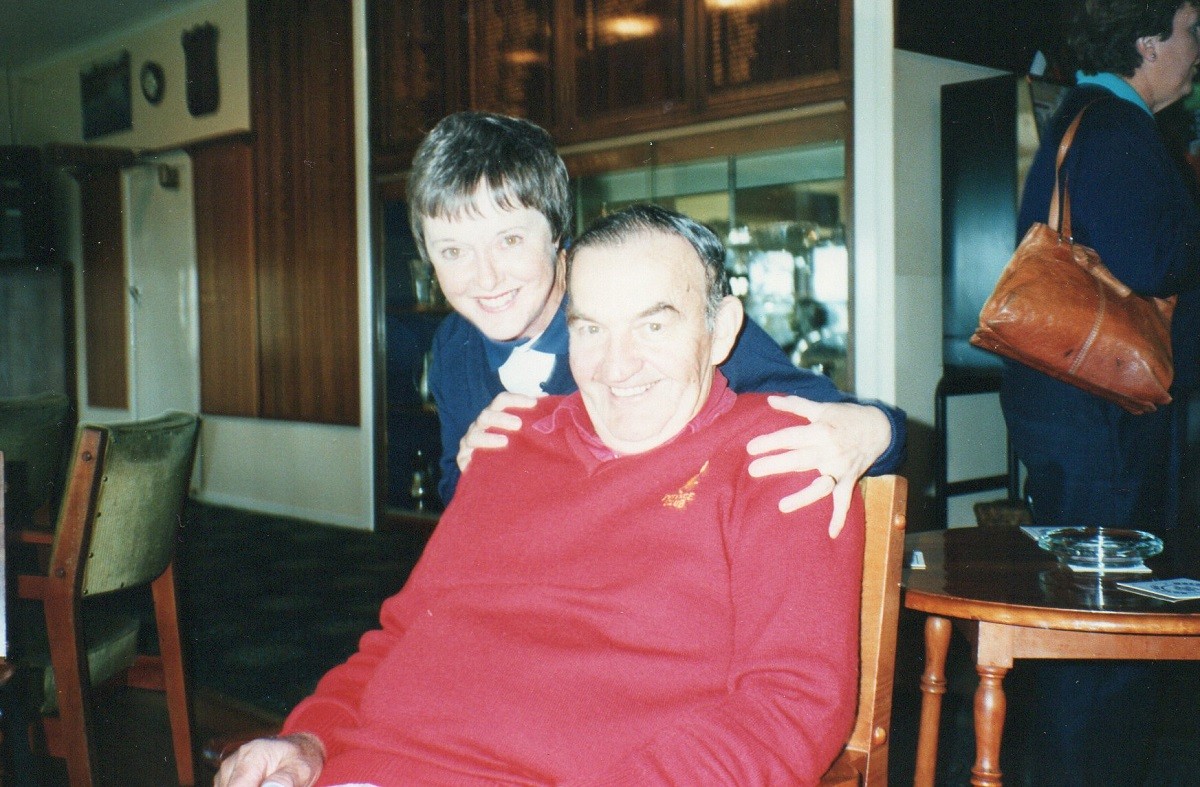 Gerry and Fay at Croydon Golf Club, circa 1980s

At that time Gerry was Manager of ANZ’s Blackburn Branch, but had recently been appointed as Manager -Industrial, General Manager's Office at 394 Collins Street, Melbourne.  By coincidence I was also working at there in the Advance Department!  We saw a lot of each other and often had lunch together and on the weekends also played golf together.  The rest is history - we were married in June 1971.

After the merger with the ES&A Bank in 1970, all the Departments at 394 were moved to 351 Collins Street, and Gerry was appointed Manager - Industrial Australian Head Quarters (AHQ) of the merged banks.

Advance Department became Lending Department AHQ and after a short time in charge of the typing pool, I was moved to the same floor as Gerry - he was at one end and I was at the other working as a receptionist for Mr. Rex Davidson, Assistant General Manager – Lending.

He was a marvellous man - the best boss I ever had!  His secretary was Enid Heriot, with whom I became great friends.

However, in 1978 a new building was constructed at 55 Collins Street, twin towers - one occupied by ANZ and the other by Telstra and once more we were on the move. Gerry and I were again in the same building, but this time on different floors!

Now another name change took place, and Lending became Corporate Accounts AHQ.  Mr. Davidson and Enid had both taken retirement, so now I was secretary to Mr. Norm Gibbs in Corporate and also typed for four of the Managers.

In 1984 Gerry was due to retire after 40 years of service. That same year, with the introduction of Personal Computers, my job as a typist became redundant, so I decided to resign and join Gerry in retirement. We had a joint Farewell Function at 380 Collins Street, in the Staff Club rooms. 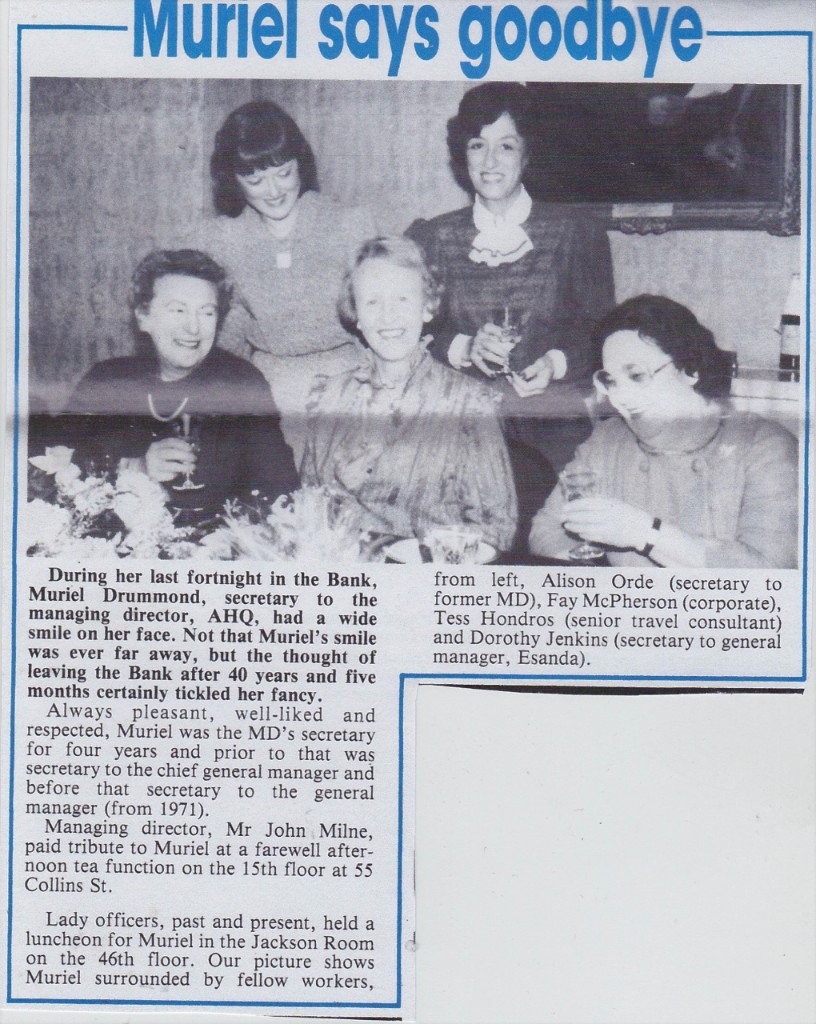 “A copy of an article from Newslink, August 1983 of Muriel Drummond's retirement. A wonderful lady, always had a smile on her face. She was Secretary to Mr. John Milne, Managing Director of ANZ and had been in the bank for 40 years.” 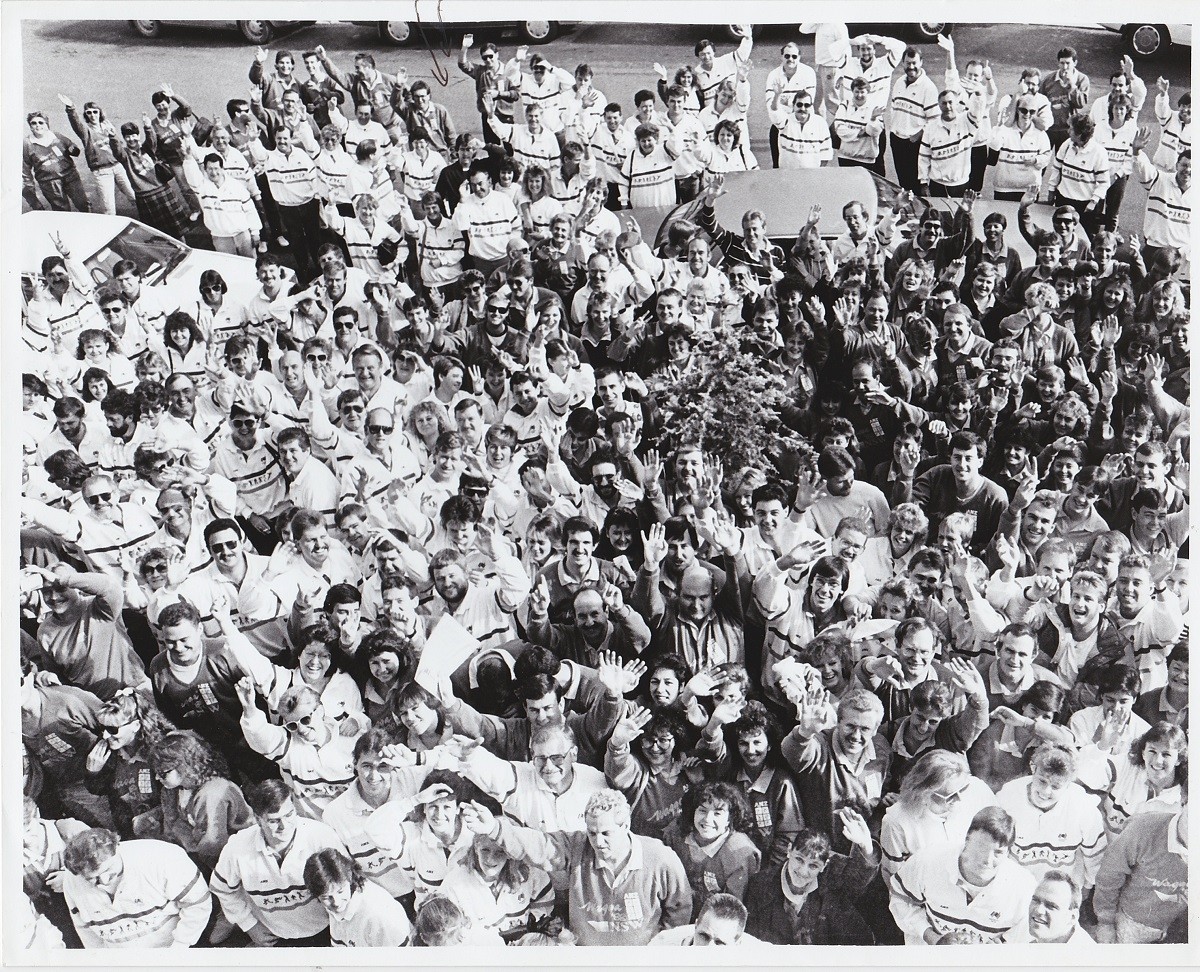 The gathering of ANZers from New South Wales and Victoria at the Wagga Wagga Long Weekend in 1988.

Bruce and Gerry moved into our new home in May, then I joined them when Gerry and I were married in June.  They all gave me a warm welcome to the family, and I was most fortunate to have a ready-made family as I was not able to have children of my own.

All of Gerry's family were overwhelmingly kind and loving to me, and it was a wonderful start to a new life together.

A lifetime of love and friendships

We both agree we could not have found anywhere better to spend our working lives than at ANZ.

We cherish the friendships we made during that time, which continued when we joined the ANZ Retired Officers' Club, which helped us to continue those friendships and make many more, while enjoying the many functions organised and especially the wonderful Christmas lunches organised by the bank.

What more can I say, it has been a wonderful life with ANZ!

The Miles family have been working at ANZ for three generations, and have more than 100 years of banking experience among them.

ANZ customer Gibbon Group celebrates its 100th year as it goes from strength to strength.