“I had the idea in 2011 and at the time I was preparing to open my own physio practice… I was thinking ‘do I drop that or do this new idea?’ My family was saying ‘focus on the physiotherapy’, that’s what you studied for.” Daniel Jones.

When Melbourne man Daniel Jones walked away from his career as a physiotherapist to start a thong company people told him he was making a mistake. But the move – to set up a business which delivers orthotic thongs - has paid off more than he could have imagined with the likes of Richmond AFL champ Dustin Martin vouching for the footwear.

Daniel’s business Archie’s Orthotic Thongs is one of the successes of the move within footwear manufacturers to make casual footwear that properly supports wearers’ feet.

ANZ customer, Archie’s has experienced “good, strong” growth and is now stocked in more than 2,000 stores nationwide - it is one of the only thongs approved by many Australian Football League (AFL) clubs for players to wear.

The company is also flourishing at a time when many people work from home and embrace casual, “lockdown wear” such as thongs (also known as flips flops) and slippers.

Some podiatrists point out that such casual wear – if not made to support the arch – can do harm to feet and ankles.

While overall retail sales were down in February 2021 (-1.1 per cent), according to ANZ Research, the share of online shopping is much higher than what we saw before the pandemic, settling at around 19 -20 per cent so far. Slipping into a gap

A decade ago, Daniel was in his mid-twenties working as a physiotherapist in the Melbourne suburb of Richmond and on the brink of opening his own practice.

“I was constantly seeing people coming in with foot and ankle problems, I saw they were wearing flat soled thongs and realised there was this recurring pattern,” he says.

“I was telling my patients to wear more supportive footwear but I felt hypocritical because I couldn’t find any on the market that I would personally wear myself. I would 100 per cent go out wearing flat thongs because there were no orthotic thongs out there.”

“I had the idea in 2011 and at the time I was preparing to open own physio practice… I was thinking ‘do I drop that or do this new idea? My family was saying ‘focus on the physiotherapy’, that’s what you studied for.”

But to Daniel pursuing his business idea was “an obvious one” as he saw the gap in the market.

“Where people had struggled was they had not been able to make something that looked like a normal thong.”

He felt the orthotic thongs on the market were big, heavy and cumbersome so not overly appealing to a younger demographic.

Through a process of trial and error Daniel succeeded. Instead of the thong and straps being two different pieces of rubber, he made the thong of one moulded piece of foam.

“Using one-piece injection moulding had several advantages. It allowed me to use incredibly lightweight and comfortable foam verses traditional rubber that many thongs are made from,” he says.

“It allowed the arch to be moulded. And eventually when perfected, this greatly improved the product’s strength and durability and allowed us to design a strap that would be easier to design to the contours of the foot.”

“It also meant the strap could be stretched if it was too tight - unlike most thong straps that are made of non-stretchable materials.”

The tight straps are crucial.

“As your feet prepare to contact the ground, the toes are meant to bend upwards and that activates the arch.”

“When your toes are gripping down as you commonly do in thongs with loose straps, the arch collapses and this interferes with the normal function of the foot. If the arch is not engaged, neither is the foot and as such it is mobile-floppy and not prepared to make contact with the ground,” Daniel says.

“This is why damage to the foot can occur in typical thongs.”

“(Our thongs) are super comfy and the tighter strap causes the thong to stick to your feet reducing the need to grip with your toes. This in combination with the arch support encourages a normal walking pattern, not normally achievable in typical thongs.”

Starting in Nan and Pop’s shed

Back in 2011, Daniel didn’t know how to get to this point. With no experience in designing footwear he sat in “nan and pop’s shed in Melbourne” with clay trying to design the model.

“My mates would call me and I would tell them I was out with the clay again,” he says.

Soon he connected with a friend of a friend who worked in the automotive industry and they were soon working on 3D computer designs.

“Everything was a cost at that stage. You’d have to save up $500 to get 3d printed version of the thong made.”

He said those early days involved investing a lot in patents and trademarks. 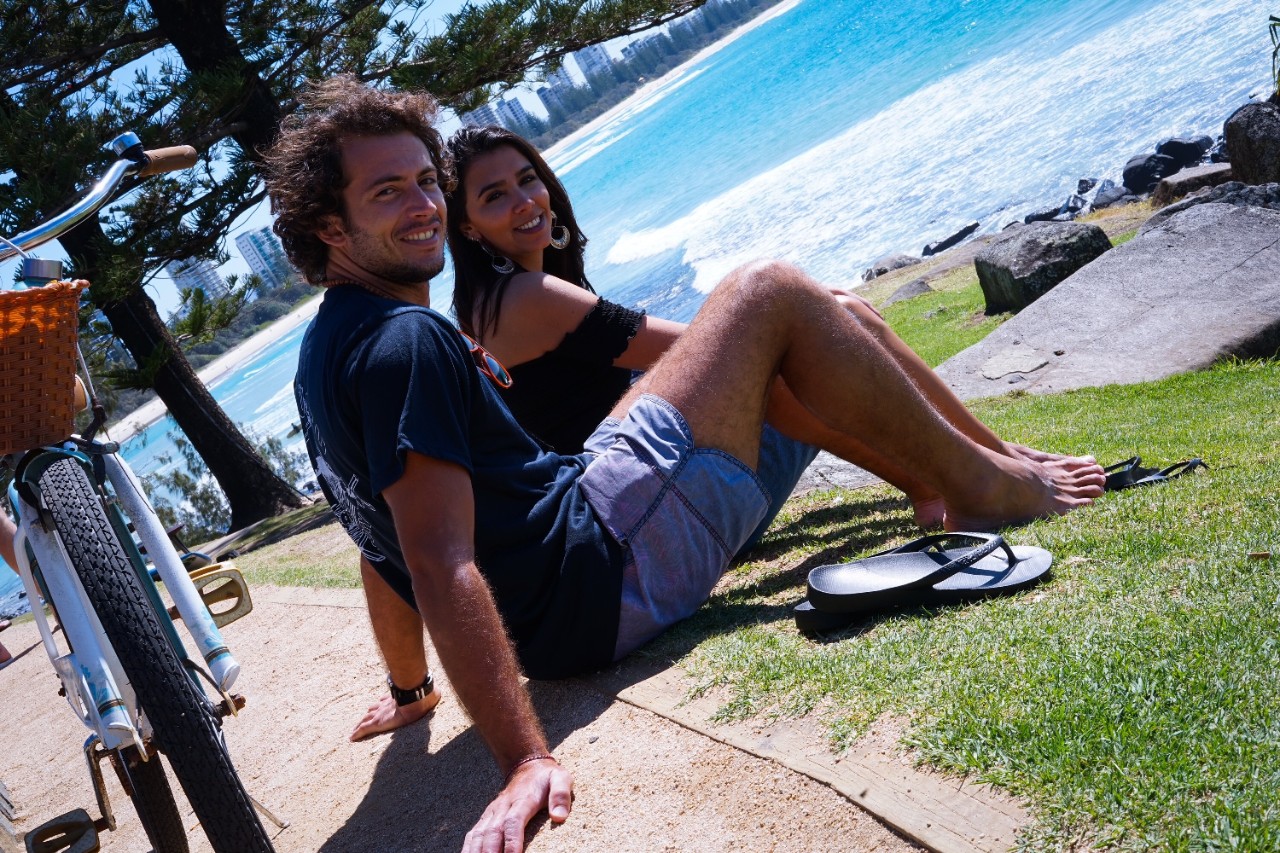 Archie's thongs are a great fit for everyone. Image via: Archies Footwear.

With a completed product Daniel moved back in with his family in Echuca, a town North of Victoria, and headed to the local Saturday market to sell the initial pairs.

“The first three hours we didn’t sell a single pair. But then a switch flicked and we managed to sell quite a few pairs which gave us some money to survive at least for another week," Daniel says.

"We initially set up the warehouse in our hometown of Echuca and ran it all ourselves, employing friends and family. The first employees were my brother, aunty, cousin and three best mates. To this day, most of our employees come from Echuca.”

One particularly frenetic weekend Daniel worked the Easter market in Echuca and then drove all the way to Noosa – a 17-hour hike – to work a market at 6am on the Tuesday.

“My car was so filled with thongs they were literally falling on my lap as I was driving.”

“The business later progressed where I was packing retail orders until the early hours of the morning, sometimes the sun would be rising and I'd look at the clock and wonder - do I even bother going to bed, I have to be up in an hour for the market. It was a tough time!”

Another savvy move was reaching out to AFL clubs.

“AFL players aren’t normally allowed to wear thongs - they are banned by clubs. Some of the trainers would cut the straps.”

So Daniel started sending them to clubs who put them on the approved footwear list. All of a sudden he would see them on Instagram worn by the likes of Dustin Martin.

Daniel reached out to Martin via a mutual friend to see if he would be a brand ambassador. Martin a huge fan of the thongs, quickly jumped on board.

Daniel says it has been important to only do things at the right time and not to be rushed. This year the company will rebuild it website.

While online has been successful, Daniel said he waited until the product was right.

“The biggest lesson is you can’t go online until the product is good quality and scalable. We started very small, keeping all our distribution in house.

“We made sure our product was good enough to be online.”

In this series, Jeff talks to small to medium businesses about their journey and experience of growth, especially during 2020 - a year like no other.

Have your own business idea? At ANZ, can help guide you through what’s important and what to avoid when you’re thinking about business development. Get in touch or find out more about our business banking products and services here.

As Australian dog owners spoilt their furry friends throughout the pandemic, one Melbourne company – started at a local market – had a box seat to the growth of this very lucrative industry.