“I had skills that I was able to effortlessly transfer over to my new role providing support to customers experiencing unexpected hardship – these soft skills are transferable to any service role you choose to do.” 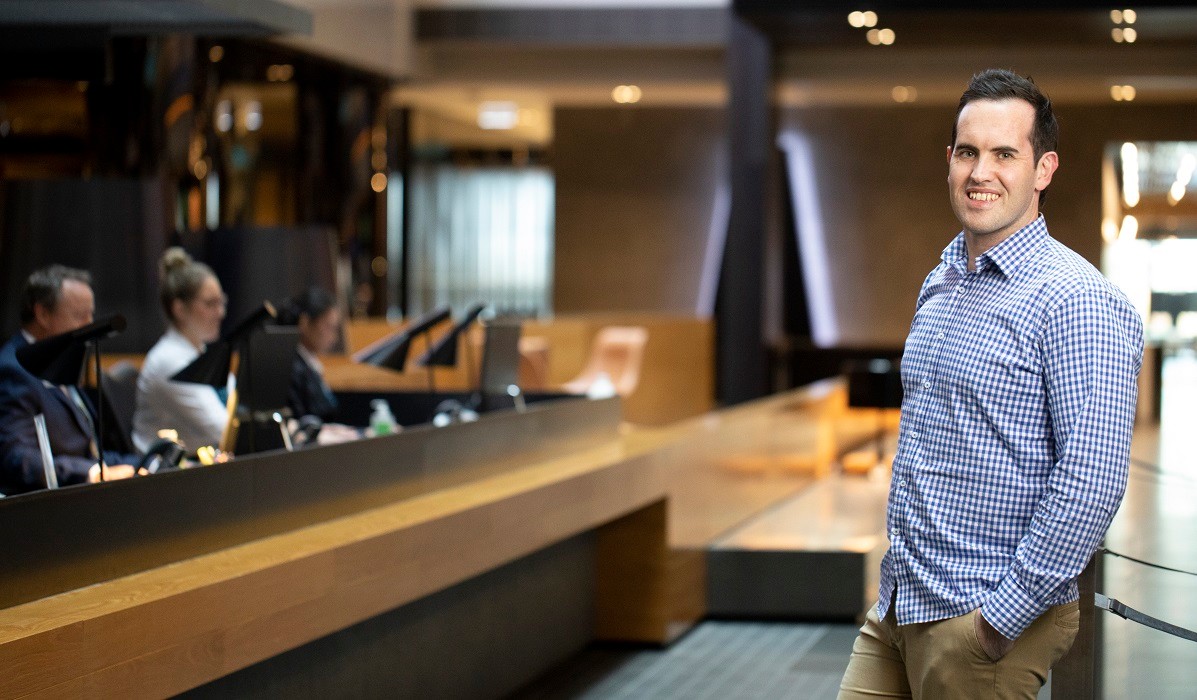 Adam in front of the concierge desk at ANZ Centre in Docklands, Melbourne. Photography by: Arsineh Houspian.

Having travelled and worked overseas when I was younger, I arrived back in Melbourne in 2012 from a stint in the UK and discovered a number of people I’d previously worked with at The Langham, a luxury hotel in Southbank, were working as part of ANZ’s concierge team.

I joined them at ANZ and spent three years as the Chief Concierge, co-running the team who focus on the staff and visitor experience at ANZ. We looked after building access passes, managed workplace lockers - of which there are something like 10,000 in total - managed the conference suites - which have around 40 different meeting rooms - and helped out with events as well.

But in 2020, as COVID-19 changed everything and people meeting in groups was discouraged, the conference suites were closed. However, most of our team were still able to perform reception roles and help manage the building. We worked under a ‘COVID-19 plan’ and had a team of around 16 people working one week on, one week off.

As time went on and things started to open back up the concierge team started to get the building ready for people to return – and then Victoria’s second wave hit.

The building went into kind of a ‘weekend mode’ as the state was in stage four restrictions and we had 95 per cent of staff working from home. That was when I was offered a role in the team helping to support customers who found themselves in difficult circumstances.

I grew up in Wodonga, three hours north of Melbourne, and left there shortly after high school to attend university in Canberra where I undertook a degree in business and hospitality.

After university, I went on an exchange program to Canada and then returned to Melbourne and The Langham. I was there for a couple of years before heading over to the UK where I worked in a basic administration role for a nursing regulator before my return in 2012.

My role now at ANZ is to support customers having trouble with their scheduled payments. We work hard to listen to our customer’s story and find a solution that works for both the customer and the bank while ensuring our customers are supported throughout their entire journey with ANZ.

I had skills that I was able to effortlessly transfer over to my new role providing support to those customers experiencing unexpected hardship – these soft skills are transferable to any service role you choose to do. Things like being able to engage and empathise with people, understand their needs and go above and beyond to help wherever you can. Good service is good service, no matter what role you’re performing and I think accountability is everything.

My role provides me with an opportunity to make a difference in someone’s life during a difficult time. Some of my hardest conversations have been speaking to people who have had life-changing events occur while dealing with the stress of the pandemic. We all experienced the same pandemic but some people had additional stressors on top of that.

My role now is about having conversations with customers about what the next one to two years is going to look like for them and arriving at sustainable solutions.

I always thought I might end up in a banking role but I just wasn’t sure what my foray into banking would look like.

In 2020 extra staff were coming into the building for training for these new roles so I looked at the ANZ careers site  to see if any roles were available.

While I can only speak from the experience I’ve had, I found networking was really important when it came to getting a new role within ANZ.

All available roles at ANZ are on the careers site so if you find a role that interests you and you might have the skills for, don’t be afraid to put your application in. If you’re already working at ANZ - find out the hiring manager’s name and send them an email introducing yourself, letting them know why you want to join the team and what skills you have.

This bar is top shelf and high tech

Edwin Low never considered he’d be almost alone in a huge office for almost a year but when COVID-19 hit he was needed in person to help ANZ employees with all matter of tech issues.

HR executive Kathryn van der Merwe shares her advice on what companies like ANZ want to see from people looking to advance their career.