70 years since the formation of the “modern ANZ”

“The values forged in this merger 70 years ago are still part of the fabric of who we are today. We are still a bank that wants to back people with a vision for a better life.” – Shayne Elliott, ANZ CEO

ANZ marks an historical milestone this month as we celebrate the 70th anniversary of a merger which led to the formation of the bank we know today.

ANZ Bank then went on to merge with the English, Scottish and Australian Bank (ES&A) in 1970 to become Australia and New Zealand Banking Group Limited. At the time that was the largest merger in Australian banking history.

A 70-year anniversary is a timely reminder of how important history and heritage are to the bank we know today. ANZ chief executive Shayne Elliott says: “While we celebrate the 70th anniversary of the modern ANZ, there is more than a 185 years of history to show how this bank has developed and how it has continued to serve our communities.”

“This is not just some abstract historical exercise. The values forged in this merger 70 years ago are still part of the fabric of who we are today. We are still a bank that wants to back people with a vision for a better life, to own their own home, start their own business or expand an existing one into new international markets,” he says.

“The way we do that is constantly evolving as we adapt, but the essence of those businesses that came together 70 years ago is still within us. And I hope my successors are still talking about those values for another 70 years to come.”

In 1951 the Bank of Australasia opened a branch in Suva and the Lautoka Branch opened in 1954 following the merger that formed ANZ. Further branches soon followed. 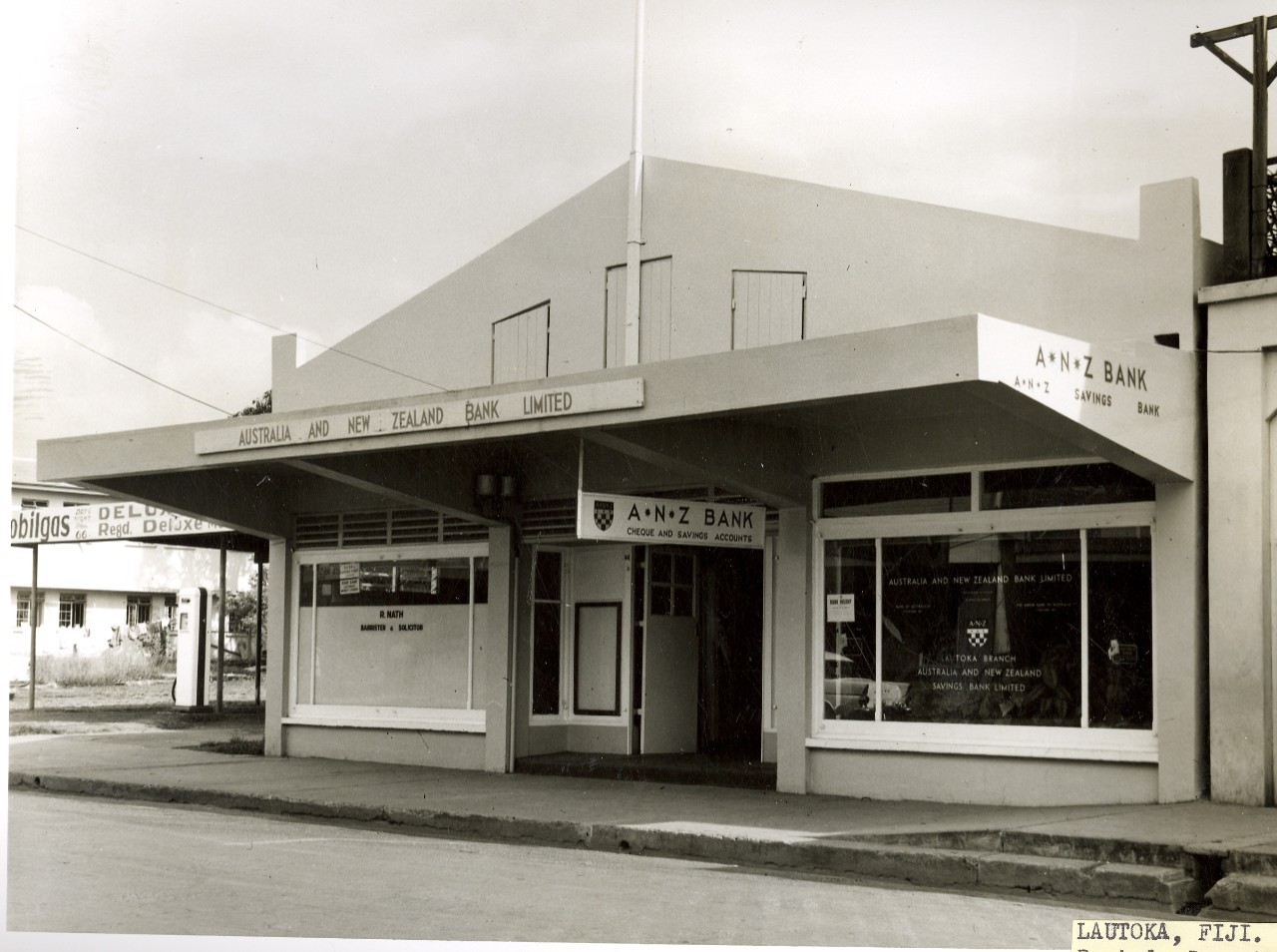 ANZ predecessor opened the first Drive-in Bank in Australia on the corner of Burke and Riversdale Roads in Camberwell Victoria. 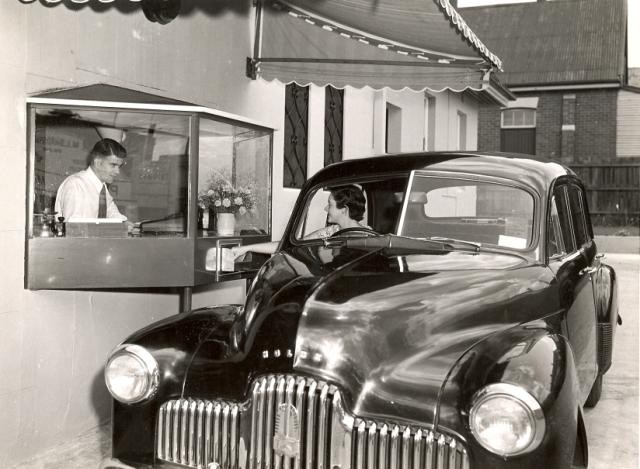 ANZ trialled the first mobile bank unit at Whakatane, New Zealand. A mobile branch was established in Victoria in 1956 where it was used to trial sites for new branches and at rural and agricultural shows and large factories. Smaller “Kombi Van” versions were in use by 1961. 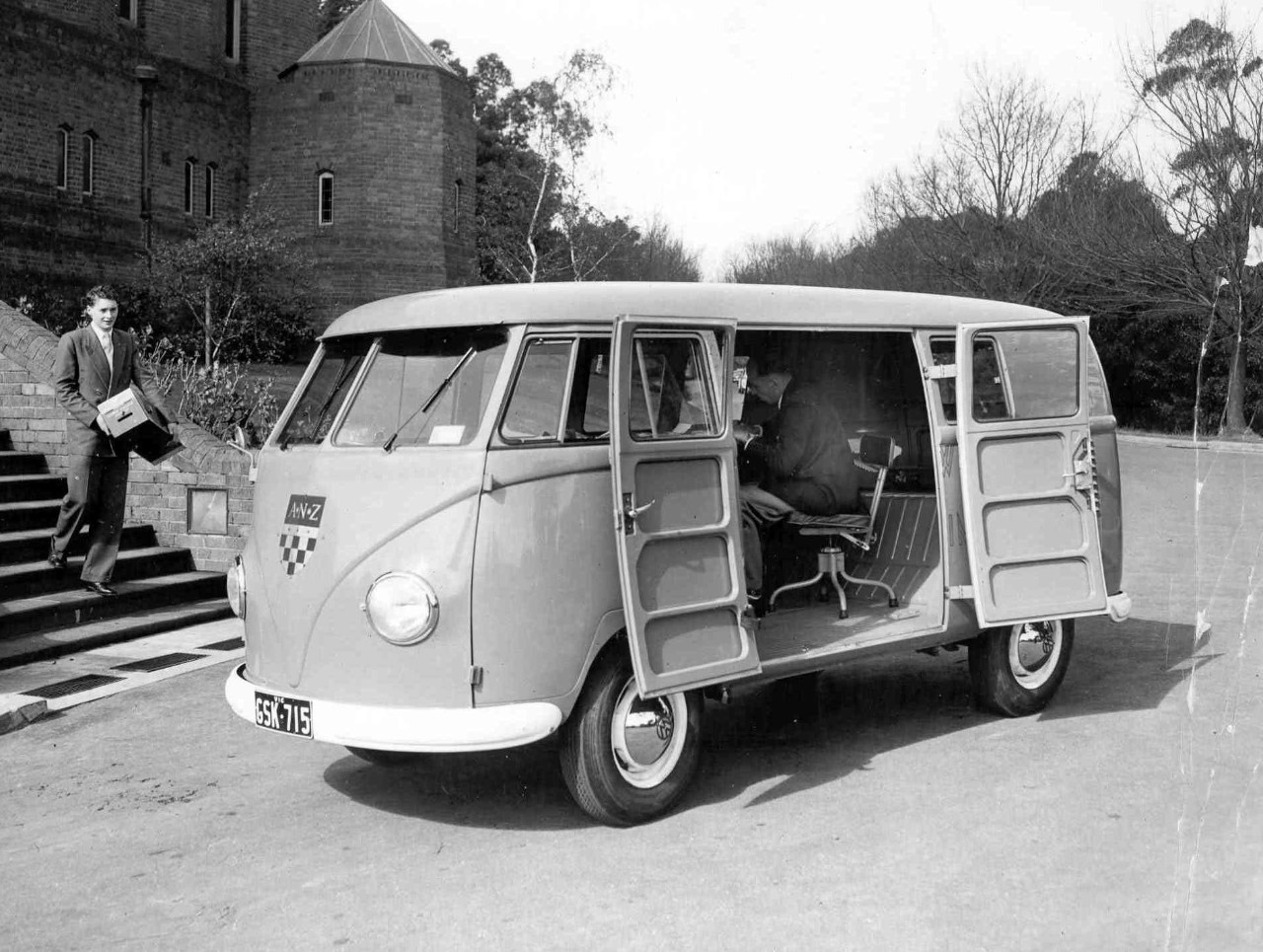 General Electric 225 was installed at a cost of £334,000 and was referred to as EMANZA (Electronic Method of ANZ Accounting). 1968 - “Coupon Banking” in the form of ANZ’s Christmas Club launched.

Christmas clubs helped customers save for Christmas by setting up a regular system of deposits throughout the year. Deposits were made using booklets of pre-formatted tear-off coupons each week.

ANZ Night & Day Bank launched in Victoria and was initially open between 7am and 11pm. They later became the first continuous 24-hour banking service in Australia, The first Australian / New Zealand bank to have a branch banking operation in the People’s Republic of China, located in Shanghai. 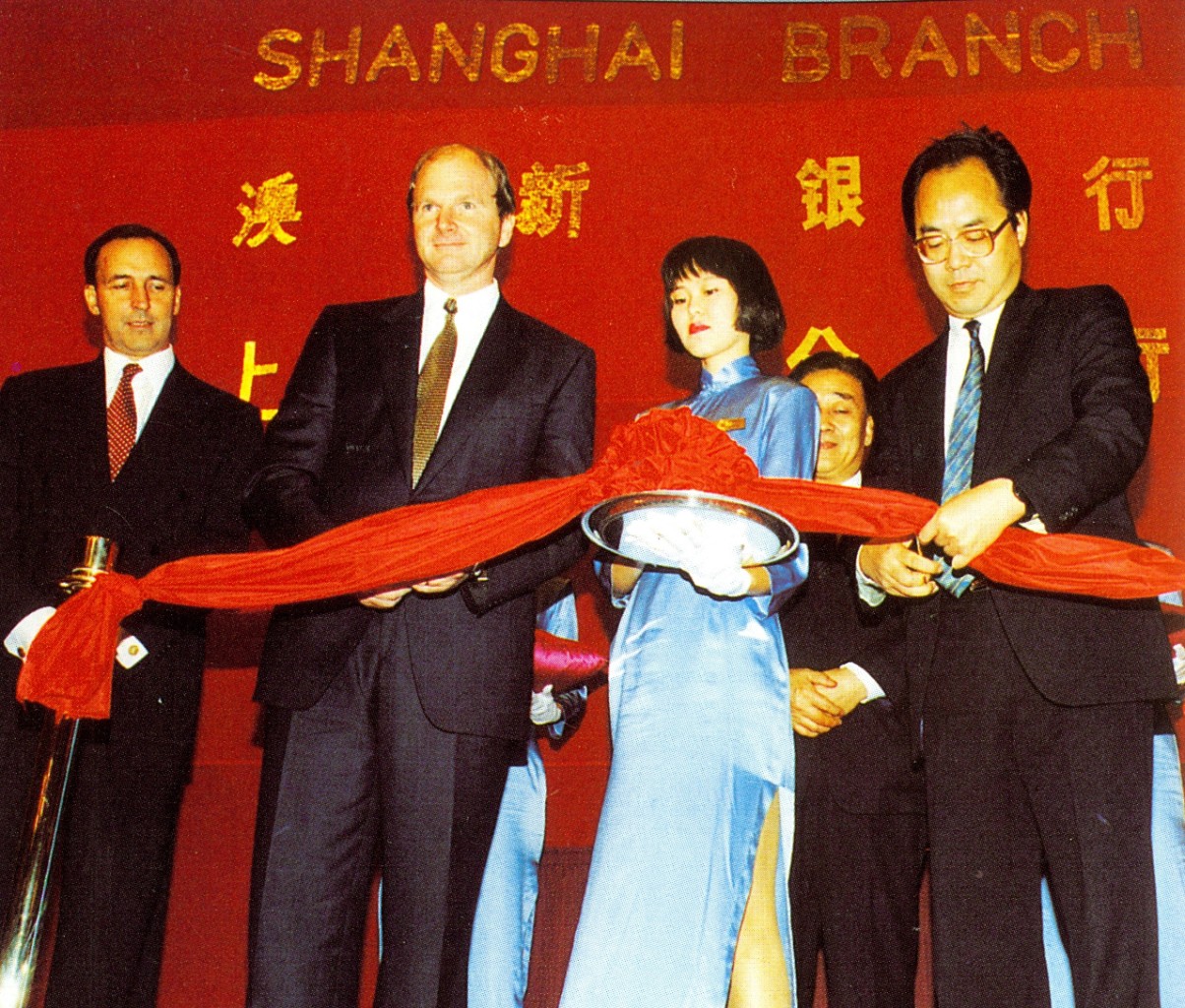 The trial of smaller in-store branches in supermarkets (and ‘hyperstores’ in New Zealand) began in Tweed Heads and reflected the changing role of branches away from transactions. 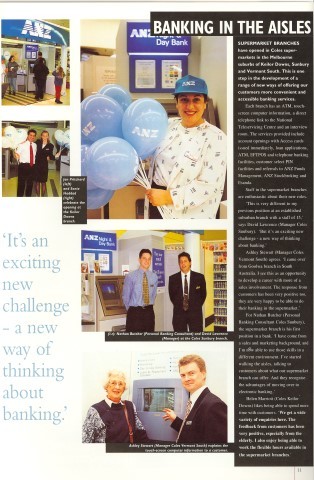 ANZ put 1.7 million customers in touch with their finances at the press of a button in 1999 with the introduction of internet banking. Customers could check account balances, transfer funds between accounts, pay bills and review past transactions as they were able to with phone banking. 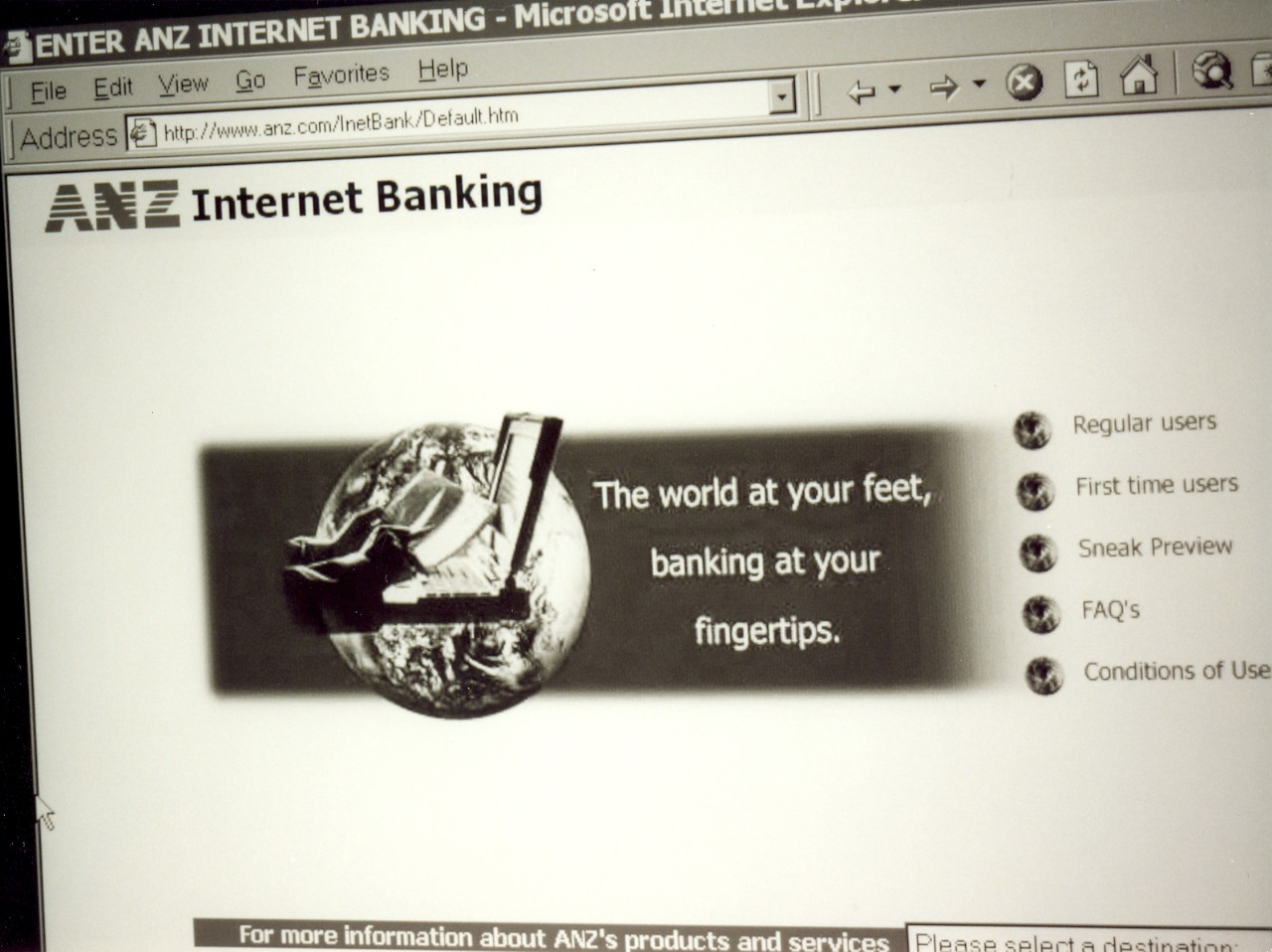 This plan was the first from any major Australian company and aimed to assist Indigenous inclusion through employment, financial literacy, cultural recognition and awareness, and capacity building. 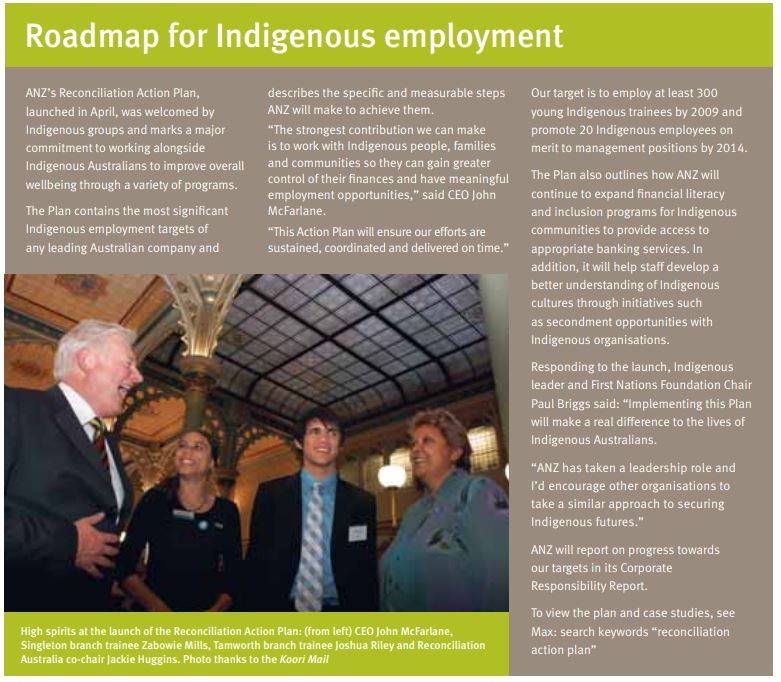 One of my favourite places at the bank is the Verdon Chambers, based at ANZ’s old gothic branch on Queen Street in Melbourne. We have so many interesting historical artefacts there and in our archives, including the charter from King William and Queen Adelaide which founded the bank.

A banking professor recently visited our archives and said it was the best kept collection of any bank he had ever seen. And that’s because the bank was headquartered in London from 1885 until 1974 so everything was written down and sent in a letter back to the head office. So we have reams and reams of those letters.

A letter I was really excited about was one I stumbled across by accident. I was at the archives and pulled out a diary to flick through. It happened to be addressed to the bank commissioner at the time – what we now know as the CEO - in 1840. His friend had been at the Signing of the Treaty of Waitangi in New Zealand and witnessed the signing. He had written back to the bank commissioner here saying "I was there and I saw this signing. There's hope for this colony, we should consider opening a bank here". It’s quite remarkable the history we have in our hands.

On history and breaking into your own bank

ANZ isn’t a 200-year old startup, but has a similar story of humble origins.

The design of ANZ’s branch network has undergone much evolution since the early 1900s. Step through the eras in this visual timeline.