Partnering for a better quality of life 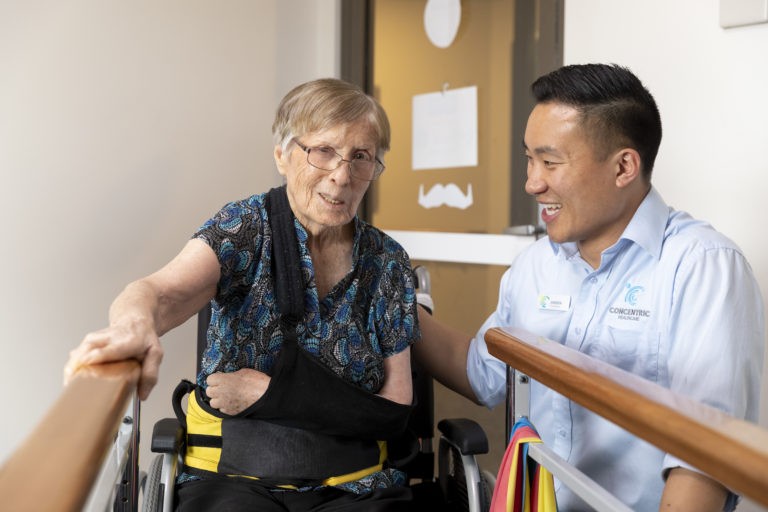 Australians are getting older and living longer. Around four million people in the nation’s population are over the age of 65 – and that means demands on aged care facilities are increasing.

Keeping people living in care fit and well is challenging in normal times according to CEO of Homestyle Aged Care Services, Tim Humphries.

That challenge has been magnified with the emergence of COVID-19 and the particular threat that poses for older populations – and the aged care sector. (See box)

For their programs, aged care homes have to rely on input from experts like physiotherapists.

"I've got some friends who are physios and every time one of them does work with a residential aged care home, they ask 'why do you do it like that?' The answer is straight forward – because that's what we're funded for by the government,” Tim says.

"We have to provide more hospital-like care but we're continuing to make it look and feel like a home for our residents. There's a real balance for us in trying to meet those two needs.”

Physiotherapist and CEO of Concentric Healthcare Services Nicholas Young says aged care residents need to have activity and they need to be kept moving. The concept of reablement – helping residents regain and maintain independence and autonomy for as long as possible – is important.

However, Nicholas says he only realised much more could be done by expert practitioners when a colleague's 94-year-old grandmother had a fall in an aged care facility, fracturing her hip.

"She went to an orthopaedic surgeon for a hip replacement. She was mobile so it was okay to perform the surgery," Nicholas explains. "She was discharged back to the aged care facility under the assumption the facility’s physiotherapist would support her rehabilitation and recovery."

That didn't happen. When his colleague's grandmother died two weeks later due to complications associated with the fracture, Nicholas realised things needed to change.

In 2017, Concentric opened its first operation within an existing aged care facility at Ashfield in Sydney's Inner West. The concept involves having a rehabilitation centre on-site that residents can access without having the difficulties associated with travelling to receive treatment.

"A perfect example is a young lady named Sharon. She had a severe stroke when she was 40 and was discharged from hospital into the Ashfield facility because her parents couldn't give her the level of care she required," Nicholas continues.

"Sharon accessed the rehab services we had on-site. With the guidance and direction of our professional staff, over the past two or three years she's been able to rehabilitate herself far beyond what would have happened in a standard aged care facility. So much so, she's now been discharged into specialist disability accommodation, which is much more suitable for someone her age."

Concentric's offering grew with the help of finance from ANZ and they were keen to expand further. The bank's Head of Health, Richard Grayson, saw what Concentric was doing and its positive impact in the community, and introduced Nicholas to Victorian-based Homestyle Aged Care Services, a long-term customer.

"Richard connected us, hoping I could give Concentric a bit of an idea of what the Victorian aged care landscape looked like. After five minutes I thought this is something we probably need to take a serious look at for ourselves," says Tim, whose homes provide care for around 1,000 older Victorians.

Tim says the partnership required a leap of faith but it makes sense for the long-term health of residents.

"We had to ignore the traditional government funding model, which from a business perspective sounds risky but from a marketing perspective and benefit to residents sounds perfect," explains Tim.

"Concentric has done the research and worked out this is the best way to support residents. For me, this is what we should be doing and the Board understands that our business is all about care. If we can enhance the care we provide, that will strengthen our reputation and enhance our services. I'm pretty confident we'll have a full home in Rowville relatively quickly, and this partnership will definitely contribute to that."

According to Nicholas, the COVID-19 pandemic has had a huge impact on both Concentric’s private practice division as well as their aged care offering.

Despite a rapid pivot to home visits and telehealth, the private practice has taken a major revenue hit. However, Nicholas says the team has noticed this drop has started to plateau and he believes sentiment in the economy is improving. He does not believe the business will return to pre-COVID-19 revenue levels for at least another three to six months though.

Many of Concentric’s aged care offering partners have shut down their rehabilitation gyms completely to protect residents so staff hours have been shifted to focus on pain management.

Nicholas says the changes to their business have pushed him as a leader to over-communicate, be transparent and show empathy like never before.

Tim agrees. He says Homestyle Aged Care Services are continuing to focus on providing the best care possible for residents living in their homes.

They have put in place restrictions on visitors - including family - in order to protect residents who are in a high risk category.

They are also acting conservatively to ensure any person entering the home is temperature checked and health screened. A COVID-19 Response Manager has also been appointed to co-ordinate the response.

Homestyle Aged Care Services have seen tremendous cooperation from residents, their family and friends, and their team continues to support the wellbeing of residents and their colleagues.

Encouragingly for the new partnership, one of the residents moving from one of Homestyle's existing facilities into Rowville is fully supportive of the services Concentric can provide and spoke publicly at a recent new residents' meeting.

"There's a lady who we have living in the home who has had a stroke and she complimented both Homestyle and Concentric for offering the program. Because for a stroke victim, this is very much what's required," Tim explains. "To have someone publicly stand up and say they are really appreciative of you taking a chance on this program because it will be of benefit to them, gave me some comfort we were doing the right thing."

According to Nicholas, while the rehabilitation centre, including a fully-equipped gym, will benefit those who live there, the general public will also be able to access the services at Rowville.

"In Ashfield, we quickly realised we should be opening our doors to the general public because we had this beautiful rehab centre. So, we started seeing clients with neurological conditions like stroke and Parkinson's disease.

"We'll do the same here in Rowville, including seeing people who have disabilities and are on the National Disability Insurance Scheme. They'll be able to access a better quality of care than what would normally happen," he says.

"People are going to be able to improve their overall wellness, rather than deteriorate within aged care."

Taking the outback by storm

Award winning, Broome based pharmacist Hannah Mann dedicates her work to improving the health of those living in remote communities.

Time can make all the difference when trying to help someone in a remote Australian town – and the Royal Flying Doctor Service just got quicker.