The following article was originally published on Stuff.

The economic downturn caused by COVID-19 has had an uneven impact, in part reflecting the unprecedented nature of the crisis.

The housing market and many domestic-orientated industries are doing well. And for many households and businesses, the economic downturn has so far had little impact on job security, incomes, or spending.

For some, the increased prevalence of flexible and remote working has even brought a welcome breath of fresh air.

But some pockets of the economy have been hit relatively hard. Those industries exposed to tourism have seen unprecedented challenges, despite a cushion from the captive domestic tourism market through winter and the wage subsidy.

The international education industry is facing a massive hole, and industries like horticulture reliant on overseas labour are facing significant problems.

The impact on the labour market has been uneven too, with 31,000 fewer people in employment compared with March – and a massive blow has been seen in retail, accommodation and food services in particular (where there are now 29,000 fewer people employed than in March. 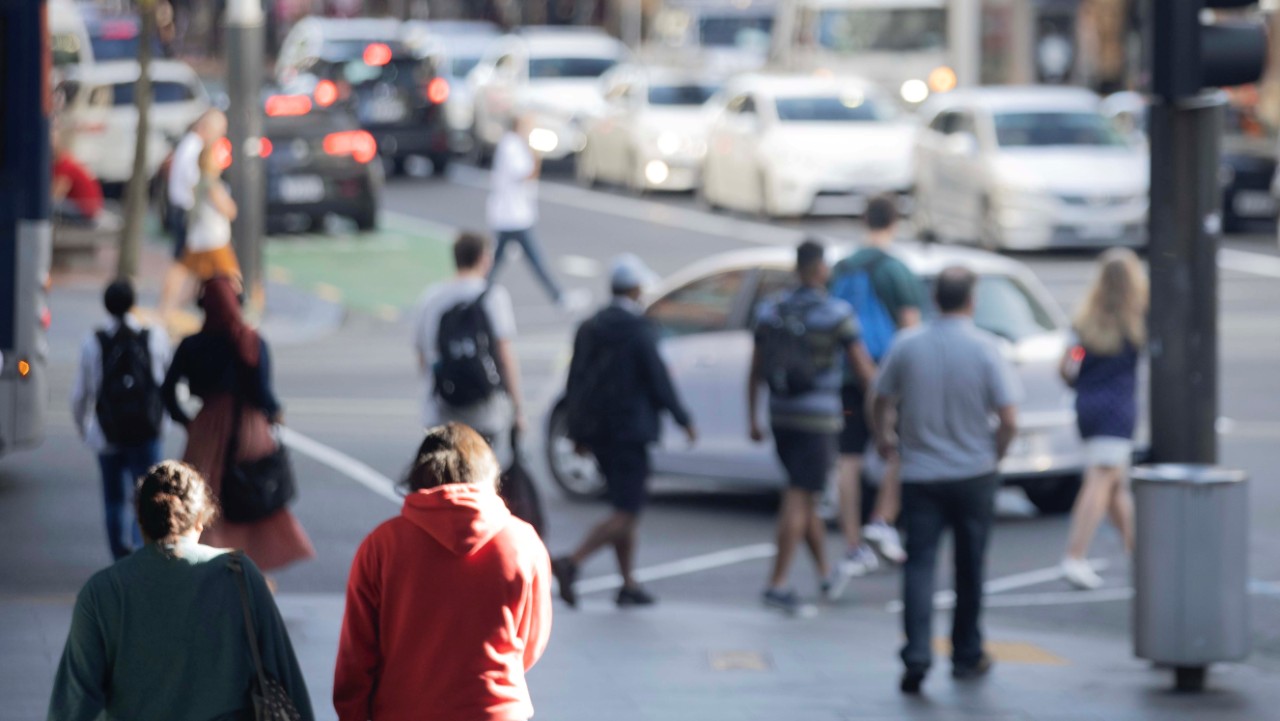 But the uneven impact hasn’t just been by industry. Job losses are unfortunately rising, and so far the impact of that has been felt disproportionately by women.

Since March, women have experienced 71% of the decline in employment (with 22,000 fewer women employed). Some of this may be voluntary, with 4,000 fewer women in the labour force, who are no longer ready, willing, or able to work. For these women, retirement, working in the home or other unpaid work may be a preferred option.

But others may not be participating because they are discouraged about their job prospects. This possibility is concerning, particularly if it becomes entrenched and productive workers, income potential and valuable skills are lost.

The “voluntary” dynamic is only a modest part of the story at best.

The fact is: we know that there are now many more women who are not in work but would like to be. The number of women who meet the definition of ‘unemployed’ – ready, willing and able to work – has increased by 19,000 since March.

In addition to the extra 19,000 women who are now unemployed relative to March, there are also more women in employment who would like to work more hours but can’t (23,000 women). Taking this into account, the female underutilisation rate is sitting at 16.2%, compared with 10.6% for men (figure 1). 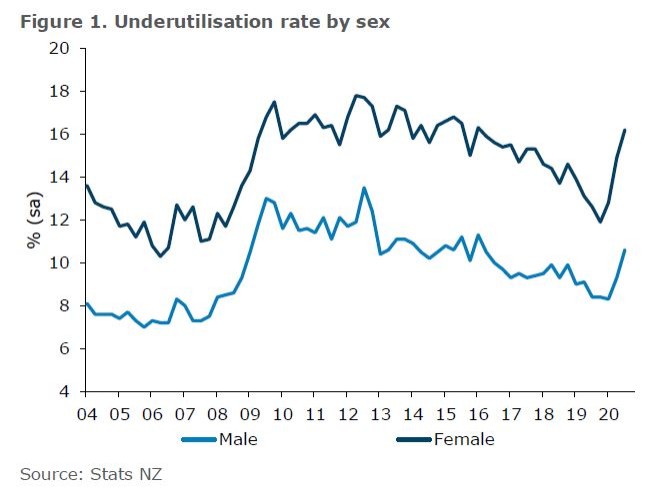 Women tend to work in lower-paid jobs on average, with average hourly earnings about 10% lower than those for men (not adjusting for job type and the like). That means that the income effects of this crisis have been uneven too.

In aggregate, incomes have been cushioned by things like the wage subsidy and the blow has been nowhere near as bad as it could have been. But some people are nonetheless much worse off than they were before, and so far the impact appears to be skewed towards those with lower-paid jobs.

Why have women been so significantly affected?

There appear to be two parts to the story (figure 2).

First, it partly reflects industry impacts of this crisis. A greater number of retail, accommodation and food services jobs are held by women (56% pre-COVID), making them more vulnerable to the industry-specific effects of the crisis.

Healthcare and social assistance jobs have also been hard hit, with more jobs in this industry held by women (83%).

Second, in a number of other industries – transport and logistics, arts and recreation services, and professional and other services – job losses have been felt disproportionately by women.

It’s possible that this reflects the nature of the jobs held by women in these industries, but it’s hard to say how much that might matter. Regardless, the point stands: women have been more affected, and the pattern is stark.

It is also worth noting that job losses are not being felt more acutely by young people who are working part time, for whom, say, an after-school job may not matter all that much from a wellbeing perspective.

Younger people (15-24 year olds) are now less likely to be employed (especially teenagers). But this has been seen alongside a significant increase in young people who are now choosing not to work while they study, rather than an increase in unemployment.

Job losses have also been dominated by those working full time, with an increase in part-time employment since March. For affected women, the impact of job losses do not appear to be at the margin, a few hours here or there. There has been a decline in employment amongst people working 30 hours a week or more. 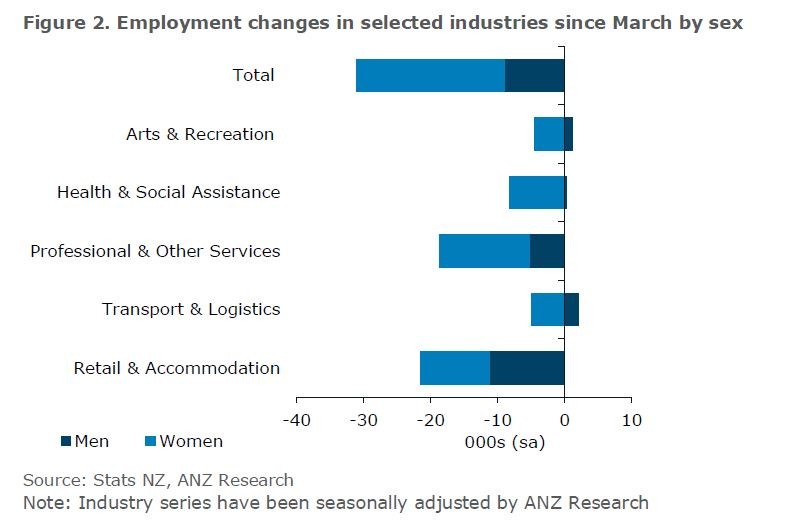 So, where to next?

Going forward, unemployment is expected to rise further – and women remain particularly vulnerable, more so than in previous recessions.

The fact is: the impact of the closed border on industries related to tourism has not yet been fully seen, with the lack of international visitors over summer where the rubber really meets the road.

Add to that the fact that many workers in vulnerable industries continue to be supported by the wage subsidy and it paints a worrying picture.

For anyone, losing one’s job can be immensely challenging – personally and financially. Income strains are a potential pressure point in the months ahead.

Those whose jobs are directly affected, or who face worse job prospects, may curb spending, and broader business activity will likely to suffer as a result.

This may see labour market impacts of the recession broaden and worsen. It’s hard to say how much – the outlook is so uncertain – but we think the unemployment rate could rise to 7½% by the end of next year.

The Government will provide an offset to the economic hit with fiscal spending on the likes of infrastructure, but these jobs may not be those that women are looking for, meaning the return to work could be slower for women too.

Although New Zealand has been relatively fortunate through the current downturn, and our economy has bounced back, the outlook remains challenging. And it is worth remembering that for some – so far, women in particular – the impact of the crisis is already well and truly clear.